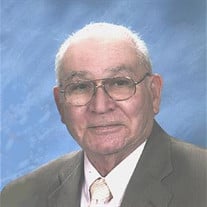 Virgil H. Blinn, 98, of Ellwood City (Wurtemburg), passed away peacefully on Monday afternoon, April 8 2019, at his home. He was born in Frisco (Franklin Twp.) on July 2 1920 , to the late Howard and Edith McDanel Blinn. He served in the US Army during WWII as a truck driver in the 2nd Armored Division, receiving four stars for the battles of Northern France, the Rhineland and the Battle of the Bulge in 1944. An Ellwood City Ledger article of April 20 2015 described Blinn"s service including enduring German V-1 buzz bombs. Virgil was a longtime active member of Wurtemburg Presbyterian Church, where he had led the youth group. He worked at many jobs, including Freeman Buick-Pontiac; George K. Garrett Co., and the Ellwood City Forge Co., where he retired, all while still owning and operating his own Blinn"s Barber Shop in Frisco. Virgil enjoyed golfing, which he took up at age 75, and traveling across the USA, Mexico, and Canada with his wife. He was a man of many jobs and a loving father. He is survived by his loving wife, Helen Bintrim Blinn, and by two sons: Randy Blinn, and Kevan (and Jill) Blinn, of Ellwood City. Also surviving are two grandchildren: Nicole and Chris Maunder; as well as three nieces: Terrie Jo Juba, Dr. Michelle (and Dr. Jake) O"Neill, and Leslie Blinn; and several great nieces and nephews. In addition to his parents, Virgil was preceded in death by his brother, Malcolm Blinn. Friends will be received from 6-8 P.M. on Thursday, April 11, 2019 in the TURNER FUNERAL HOME, 500 Sixth Street, Ellwood City. Additional visiting will be for one hour, from 10-11 A.M., prior to funeral services on Friday, April 12, at 11:00 A.M. at Wurtemburg Presbyterian Church, with Dr. Daniel Stinson, former pastor, and Rev. Rob Guy, pastor, officiating. Burial will be in Sylvania Hills Memorial Park. You may sign his guestbook online or send condolences at: www.turnerfh.com

Virgil H. Blinn, 98, of Ellwood City (Wurtemburg), passed away peacefully on Monday afternoon, April 8 2019, at his home. He was born in Frisco (Franklin Twp.) on July 2 1920 , to the late Howard and Edith McDanel Blinn. He served in the... View Obituary & Service Information

The family of Virgil H. Blinn created this Life Tributes page to make it easy to share your memories.

Send flowers to the Blinn family.