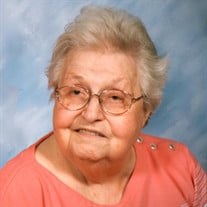 Twila A. Tanner, 86, of Ellwood City, passed away peacefully on Sunday, December 16, 2012 at her home. She was born in Ellwood City on December 19 1925 to the late Leonard and Sadie Hawkey Nagel. Twila was a graduate of Lincoln High School and was a lifetime member of Bell Memorial Presbyterian Church, where she had served as an elder, Sunday School teacher, junior church leader and church secretary. She also served as a Girl Scout leader for several years. She worked at W.T. Grant Co. in Ellwood City during her high school years. Later she worked as a secretary for Mathews Conveyor in Ellwood City, and then at attorneys Craig, Craig, and Ruffner in Aliquippa before working as secretary at Keller and Luxenburg. She also worked as a court reporter for Workingmens Comp in New Castle. She enjoyed crafts and ceramics, and for many years gave demonstrations on gift wrapping to various groups. In addition to her parents, she was preceded in death by her husband of 41 years, Fred G. Tanner, on April 26, 1989, and by one brother, Lawrence Nagel. She is survived by her son and daughter: Terry Tanner of Ellwood City, and Penny (and Steve) McCronich of Ellport; and by two granddaughters, Jodi Graham and Erin McCronich. One sister, Beverly Falen of Zelienople, and two sisters-in-law: Dorothy Wiley and Shirley Tanner, both of Ellwood City, and her caregiver, Mila Smith, also survive. Friends will be received from 6-9 P.M. on Wednesday, December 19, 2012 in the TURNER FUNERAL HOME of Ellwood City, Sixth Street at Park Avenue. Services will be conducted at 11 A.M. on Thursday, December 20, 2012 at TURNER’S with Rev. Derek Longbrake, her pastor, officiating. Interment will be in Sylvania Hills Memorial Park, Inc. Daugherty Twp. Memorial contributions may be made, in Twila’s name, to the Bell Memorial Church Scholarship Fund, 610 Line Avenue, Ellwood City. You may view the obituary, sign the guestbook, and send condolences online at www.turnerfh.com.

Twila A. Tanner, 86, of Ellwood City, passed away peacefully on Sunday, December 16, 2012 at her home. She was born in Ellwood City on December 19 1925 to the late Leonard and Sadie Hawkey Nagel. Twila was a graduate of Lincoln High School... View Obituary & Service Information

The family of Twila A. Tanner created this Life Tributes page to make it easy to share your memories.

Twila A. Tanner, 86, of Ellwood City, passed away peacefully...

Send flowers to the Tanner family.