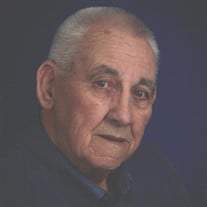 Ted C. Ford, 89, of Ellwood City, PA, passed away peacefully, on March 2, 2020 at Northview Estates in Ellwood City. He was the son of the late Raymond and Ina Dunham Ford and was born on February 7, 1931 in Ellwood City, PA. He is survived by his wife, of 12 years, Hazel Beltz Ford,of Ellwood City, Son; Ronald Ford of North Beaver Twp, PA, Sister; Janine Nichol and her husband John of Colorado, Stepchildren; Brenda Peffer and her husband Vic of Zelienople, PA; Sharon Swortwood of Ellwood City, Pamela MacMurdo and her husband Duke of Zelienople, PA, 4 step grandchildren, and 3 step great-grandchildren. He was married to Hazel Beltz Ford and attended Christ Presbyterian Church, in Ellwood City. Ted was a US Army Veteran, serving proudly from 1949-1953, during the Korean War and spent 17 months in Korea. He was awarded the Korean Service Medal with 5 Bronze Campaign Stars. He was retired from Ellwood City Forge ,with 32 years of service. He was also an avid golfer, with a 7-handicap and was proud to have 3 hole in ones. Ted was also an avid hunter. He was a loving husband, father, grandfather and great-grandfather. He was preceded in death by his first wife Norma Jean Meiter Ford, one brother; William Ford, and a sister; Carol Rozanski. The family will receive friends on Wednesday, March 4, 2020 from 5:00-7:00pm, with full Military Honors, to be rendered, by the Veteran’s Honor Guard, at 6:00pm at the TURNER FUNERAL HOME located at 500 6th STREET- ELLWOOD CITY, PA. A Memorial Service will follow, at 7:00pm, at Turners, with Reverend Todd Custer, officiating. Inurnment will be in Wurtemburg Cemetery in Wayne Twp, PA, at a later date. In lieu of flowers, the family is requesting donations to St. Jude, at stjude.org or the chairity of your choice, in Ted’s name. You may read the obituary, sign his guestbook, or send condolences at: www.turnerfh.com

Ted C. Ford, 89, of Ellwood City, PA, passed away peacefully, on March 2, 2020 at Northview Estates in Ellwood City. He was the son of the late Raymond and Ina Dunham Ford and was born on February 7, 1931 in Ellwood City, PA. He is survived... View Obituary & Service Information

The family of Ted C. Ford created this Life Tributes page to make it easy to share your memories.

Send flowers to the Ford family.