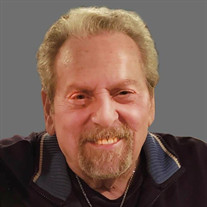 Joseph H. Rubino, 78, of Ellwood City passed on March 12th, 2022 while at home surrounded by his loved ones, Joe departed from his wife's loving arms into the arms of his Lord and savior Jesus. He was the son of the late Stephen and Rose (Pegley) Rubino and was born April 2, 1944, in Ellwood City. In 1971, he married the love of his life and wife of fifty years; Linda Waligorski of Buffalo, NY. In addition to his wife, he is survived by his daughter Stephanie Stotts and her husband Mark, and his three grandchildren; Joseph Wharrey and his wife Savana, Amber Wharrey, and Ava Stotts. He is also survived by his sister Louise Sacco. In addition to his parents, he is preceded in death by his brother Steven Rubino. Joe was a 1963 graduate of Lincoln High School. After high school he was employed by Penn Power Electric Company and eventually worked for the Borough of Ellwood City as a meter reader. Joe's love and knowledge of all things electrical led to the opening of his own store, 'Rubino Electric'. Joe operated his store from 1977 up until 2021. If he wasn't working on contracted jobs in the field, you could find him behind the counter with a smile on his face and a story to tell. As an avid car enthusiast, Joe loved his Corvette and Ford Fairlane. This got him involved in the Corvette Club that connected him with other car enthusiasts. He was known for organizing the first car show at the Ellwood City Arts and Crafts festivals. His immaculate 1957 Ford Fairlane will be passed down to his grandson, Joseph. He was also involved in many local clubs, such as; the Ellwood City Jaycees, the Moose, and SOI. He was the executive director of the Ellwood City Women's softball league for many years. He also kept up with the 1963 class of Lincoln High School, meeting monthly to organize class reunions. Joe was well-known for his secret pasta sauce and meatball recipe. You could often find him making it while watching the Steelers' games on Sundays. He was an avid Pittsburgh Sports fan. The family would like to extend their appreciation to the whole staff of AHN Hospice, as well as everyone who visited Joe in the hospital and at home. A special thank you to Melissa Hill, who spent many days caring for Joe and Linda, making Joe as comfortable as he could be and assisting Linda with all at-home Hospice duties. The cards, meals, and diligent prayers didn't go unnoticed from friends that stopped by over the last few weeks. Donations can be made to Word Alive Church for the completion of the Pavilion, that was organized by Joe. As well as the Beaver County Humane Society. The family will receive friends from 3:00pm-7:00pm on Thursday, March 17, 2022, at Turner Funeral Home. There will also be an additional hour of calling, on Friday, March 18, 2022, from 10:00am - 11:00 am, with Funeral Services following at 11:00am, at Turner's, with Reverend Matthew Bupp and Reverend Matthews Reynolds, officiating. Arrangements entrusted to THE TURNER FUNERAL HOME located at 6th and Park in Ellwood City.

Joseph H. Rubino, 78, of Ellwood City passed on March 12th, 2022 while at home surrounded by his loved ones, Joe departed from his wife's loving arms into the arms of his Lord and savior Jesus. He was the son of the late Stephen and Rose (Pegley)... View Obituary & Service Information

The family of Joseph H. Rubino created this Life Tributes page to make it easy to share your memories.

Send flowers to the Rubino family.