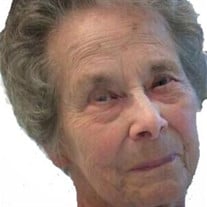 Jean Morrow Cunningham Wick, 96, was born on Foch Street in the Ewing Park section of Ellwood City on May 11, 1921 to parents Carrie Burket Morrow and Charles King Morrow. Shortly after her birth, her father, C.K. Morrow, built the house in Ewing Park where she grew up. Jean spent her final years there until health required a move to the Trinity Oaks Care Center in Beaver, where she passed away on Saturday morning, February 10 2018. That nearly one hundred year old house in Ewing Park, built by her father, is still occupied by members of her family. After graduation from Lincoln High School in 1937, Jean matriculated to Grove City College, until her marriage to the late Paul Cunningham. Not being permitted to be married and attend Grove City, she transferred to Geneva College where she graduated with a Degree in Education. Jean later earned a Master's Degree in Reading Education from Westminster College. A well-known and beloved educator in the Beaver Township and Ellwood City Schools, Jean began her teaching years in a one room school house in Pleasant Valley which she laughingly described as "not very pleasant" until she retired from the Ellwood City Area School District in 1975. Throughout her forty year career as a teacher, Jean taught thousands of local children to read. After the death of her first husband Paul Cunningham in 1963, she married her childhood friend, the late Donald Wick, in 1967. He died in 1993. This marriage blended two families whose members celebrate her life and grieve her passing. Her children include David P. Cunningham (Sue) of Laramie, Wyoming; Linda Cunningham Weyman (Jim) of Hilliard, Ohio; Don U. Wick (Sandra) of Smith Center, Kansas; and Dr. Debra Cunningham Facello (Joe) of Saint Clairsville, Ohio. Truly the matriarch of the family, Jean was dearly loved by her children, many grandchildren, great grandchildren, nieces, nephews, and friends. As a faithful member of the Slippery Rock Presbyterian Church as well as the Ellwood City Chapter #212, Order of The Eastern Star (Past Matron), donations can be made to either or both in her memory. Eastern Star will conduct a service at the church at 9:45 A.M. Saturday Feb.17. Arrangements are entrusted to the care of the TURNER FUNERAL HOME, 500 Sixth Street, Ellwood City. Visitation will be held from 10:00 A.M. to 11:00 A.M. on Saturday, February 17 2018 at the Slippery Rock Presbyterian Church, Ellwood City, followed by a Funeral Service at 11:00 A.M. led by Pastor Carolyn Fenner Moss. A lunch for family and friends will follow in the church hall. A special thanks to Trinity Oaks in Beaver and Gateway Hospice for her great care. You may read the obituary, sign her guestbook, or send condolences at: www.turnerfh.com

Jean Morrow Cunningham Wick, 96, was born on Foch Street in the Ewing Park section of Ellwood City on May 11, 1921 to parents Carrie Burket Morrow and Charles King Morrow. Shortly after her birth, her father, C.K. Morrow, built the house in... View Obituary & Service Information

The family of Jean Cunningham Wick created this Life Tributes page to make it easy to share your memories.

Jean Morrow Cunningham Wick, 96, was born on Foch Street in the...

Send flowers to the Wick family.