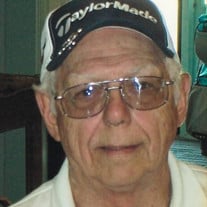 James A. McLaughlin, Jr, 90, of Ellwood City died Wednesday, August 11, 2021, at Good Samaritan Hospice House in Wexford, PA. He was the son of the late James A. and Florence K. (Kilpatrick) McLaughlin and was born April 20, 1931, in Ellwood City. He is survived by his wife, Toni McLaughlin of Ellwood City, his children: Dr. Cheryl Snyder of Sacramento, CA, Dr. James A. McLaughlin, III of Salisbury, Md, one stepson; Kyle Sentz of Ellwood City, grandchildren; Amanda McLaughlin and her husband Mario Freixas of Parkland, FL, great-grandchildren; Peyton Freixas and Quinn Freixas, and one sister; Janice Custozzo of Rochester, NY. Jim was a 1949 graduate of Lincoln High School and was on the state championship gymnastics team, where he specialized in rings and pommel horse. He married his first wife, Josephine Custozzo in 1951 and they were married 62 years, until her passing. He married his second wife, Toni Gidaro in 2014 and were married 6 years. He was retired from the Ellwood City Forge with over 40 years of service. He was parishioner of Holy Redeemer Catholic Church. He was a Boy Scouts leader for many years, and he also served on the Lawrence County Council of the Boy Scouts. He was a former Secretary of the Ellwood City Jaycees. Jim was also a member and instructor of the Ellwood City Art Club and an avid golfer. He was also a proud Lincoln High School Blue Band Booster. He is preceded in death by his first wife, Josephine (Custozzo) McLaughlin, one brother: Robert Donald McLaughlin Interment will be in Holy Redeemer Cemetery, at a later date. The family would like to extend a very special thank you to Good Samaritan Hospice and especially Brittany for their great care, concern, and love during Jim's last months. Arrangements entrusted to the TURNER FUNERAL HOME located at 500 6th Street Ellwood City, PA.

James A. McLaughlin, Jr, 90, of Ellwood City died Wednesday, August 11, 2021, at Good Samaritan Hospice House in Wexford, PA. He was the son of the late James A. and Florence K. (Kilpatrick) McLaughlin and was born April 20, 1931, in Ellwood... View Obituary & Service Information

The family of James A. McLaughlin Jr. created this Life Tributes page to make it easy to share your memories.

Send flowers to the McLaughlin family.