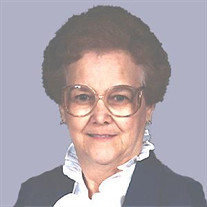 M. Eleanor Orr, 90, of Ellwood City, went to be with her Lord and Savior on Friday morning, January 18 2019, from The Grove at Harmony. She passed away only two weeks after her husband. She was born in Ellwood City on June 16 1928 to the late Wilbert and Ethel Kennedy Jessop. She graduated from Lincoln High School in Ellwood City in 1946, and worked at the Bell Telephone Co. office in Ellwood City as an operator. Later she worked as head cashier at Christy"s Market. Eleanor was a longtime faithful member of Park Alliance Church in Ellwood City. She belonged to the Adult SS Class, Alliance Women, stamp ministry, and taught Sunday School. She also was an officer of the WCTU, and her high school reunion committee. Eleanor enjoyed boating, fishing, waterskiing, sewing, crocheting, embroidery, and loved tending to her flower beds. Eleanor married William F. Orr over 69 years ago, on August 12 1949. He died January 2 2019. In addition to her parents and husband, she was preceded in death by one son, Dwight Orr, on July 14 1973; and by one great grandson, Jamisen William Gravatte, on March 25 2008. She is survived by her daughter, Diane Peters of Hermitage PA; and by her son, Douglas Orr, and daughter-in-law, Melodee Orr, of Midland City Alabama. Six grandchildren and three great grandchildren also survive. She is also survived by one sister, Naomi Jessop McCoy of Kittanning. Two brothers, Donald Ray Jessop and Paul DuWayne Jessop; and one sister, Ethel Delores Vogler, preceded her in death. Friends will be received from 2-4 P.M. and 6-8 P.M. on Tuesday, January 22 , 2019 in the TURNER FUNERAL HOME, 500 6TH Street, Ellwood City. Services will be conducted at TURNERS on Wednesday, January 23, 2019 at 11:00 A. M. with the Rev. Wes Sherry, current pastor, and Rev. John McCready, former pastor, of Park Alliance Church, Ellwood City, officiating. Burial will be in Slippery Rock Church Cemetery. Memorial donations may be made in her name to the Park Alliance Church, 701 Jefferson Avenue, Ellwood City. You may sign her online guestbook, or send condolences at: www.turnerfh.com

M. Eleanor Orr, 90, of Ellwood City, went to be with her Lord and Savior on Friday morning, January 18 2019, from The Grove at Harmony. She passed away only two weeks after her husband. She was born in Ellwood City on June 16 1928 to the... View Obituary & Service Information

The family of M. Eleanor Orr created this Life Tributes page to make it easy to share your memories.

Send flowers to the Orr family.