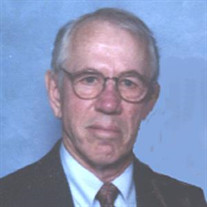 Edward P. Miller, 87, of Alliance Ohio, formerly of Ellwood City, passed away peacefully on Sunday morning, August 19 2018 at Altercare of Alliance. He was born in Ellwood City on July 4 1931 to the late John and Catherine Linder Miller. Ed graduated from Lincoln High School in Ellwood City, class of 1949. He then served for 3 years during the Korean War in the US Navy. He was a millwright and welder for 35 years in the tubular division at the former Babcock and Wilcox Company plant in Beaver Falls. Ed was also a faithful member of First United Methodist Church in Ellwood City, where he had served as a trustee, and head usher. Ed was also a member of the Northcoast Miata Club and enjoyed sports car rallies, chess, woodworking, and spending time with his family. He was preceded in death by his wife of 56 years, Shirley L. Wardman Sofelkanich Miller, who died January 28 2014. They were married on May 5 1957. He was also preceded by one sister, Marie Bianco Conway. He is survived by one son, J. Scott (and Mary ) Miller of Minerva OH; and by one daughter, Jody L. Miller of Chippewa Township PA. Two grandchildren also survive: Tiffany (and Jared) Fonner and Justin Miller, as well as two great grandchildren: McKayla and Jacob Miller. One brother, William J. (and Catherine) Miller of Ellwood City, also survives. Friends will be received from 4-8 P.M. on Friday, August 24 in the TURNER FUNERAL HOME, 500 6th Street, Ellwood City. Celebration of life services will be conducted at TURNERS on Saturday, August 25, at 1:00 P.M. with the Rev. Angelique Bradford of First Methodist Church, and Rev. Harley Wheeler of Minerva United Methodist Church in Minerva OH co-officiating. Full military rites will be observed at the funeral home by the Veterans Honor Guard. Burial will be in Clinton Cemetery, New Beaver. Memorial donations may be made in his name to the donors" favorite charity. You may sign his guestbook, or send condolences at: www.turnerfh.com

Edward P. Miller, 87, of Alliance Ohio, formerly of Ellwood City, passed away peacefully on Sunday morning, August 19 2018 at Altercare of Alliance. He was born in Ellwood City on July 4 1931 to the late John and Catherine Linder Miller. Ed... View Obituary & Service Information

The family of Edward P. Miller created this Life Tributes page to make it easy to share your memories.

Send flowers to the Miller family.