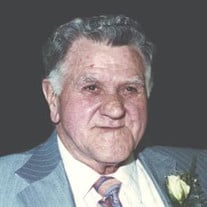 Edward C. Lintz, 92, of North Sewickley Township (Ellwood City), passed away peacefully on Wednesday, February 13 2019 at Good Samaritan Hospice at Heritage Valley Beaver. He was born in Evans City PA on March 1 1926, to the late Charles and Earla Nelson Lintz. He served in the US Navy during World War II, as an aviation machinist mate aboard the USS Pasadena, in battles in the Philippines and Iwo Jima. Lintz was a witness to the signing of the armistice in Tokyo Bay. A well known home builder, he owned Lintz Construction, building many area homes and buildings. With his late wife, Dorothy, Ed also owned Stallion Hill Western Store on Mercer Road, and he enjoyed hunting, their Appaloosa horses and spending time with their family. He had been a member of North Sewickley Presbyterian Church. He was preceded in death by his wife of 67 years, Dorothy "Dot" Sumner Lintz. She died on December 4, 2013. He was also preceded by an infant daughter, Terri Lee Lintz. He is survived by two daughters and their husbands: Debbie (and Ronald) Montgomery of Wampum; and Gail (and Dan) Lemmon of Grafton Ohio. One granddaughter, Tasey (Vince) Marechal and two great grandsons also survive: Austin and Dylan Marechal, as well as one brother, Robert (Sandy) Lintz, and one sister, Joy Steiner. One brother and four sisters preceded him: William ( Bud ) Nelson, Judy Fanfarilli, Chryl Krieger , Beverly Lintz, and Betty Frank. Friends will be received from 2-4 P.M. and 6-8 P.M. on Tuesday, February 19 2019 in the TURNER FUNERAL HOME, 500 Sixth Street, Ellwood City. Funeral services will be conducted at 11:00 A.M. on Wednesday, February 20 at TURNERS, with the Rev. Ron Nagel , officiating. Burial will be in Clinton Cemetery, New Beaver Boro. Memorial donations may be made in Ed"s name, to the Salvation Army. Full military rites (at TURNERS) will be observed by the Veterans Honor Guard. You may sign his guestbook, or send your condolences at: www.turnerfh.com

The family of Edward C. Lintz created this Life Tributes page to make it easy to share your memories.

Send flowers to the Lintz family.