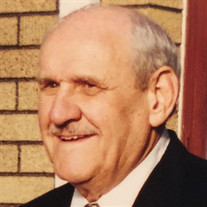 Donald A. Lemke, 93, of Ellwood City, PA, formerly of Austintown, Ohio, passed away peacefully on May 8, 2020 at Heritage Valley Beaver Medical Center. He was the son of the late Arthur H. and Minnie Scherer Lemke and was born on January 27, 1927 in Youngstown, OH. He is survived by his loving wife, of 22 years, Ann Vignovich Lemke, of Ellwood City, three sons: Donald A. Lemke, of Houston, TX, Keith A. Lemke and his wife Mary Ann, of Austintown, OH, and Gene Lemke of Melbourne, FL; and numerous multi-talented and greatly cherished grandchildren, great-grandchildren, and nieces and nephews. Ann would also like to extend a special thanks to Paula Ford and Wendy Davis, whom Don adored as his own family, for their love, care, and continual support during this difficult time and always. Don was a World War II Veteran, serving in the United States Navy on the USS McCord. Once home, he started Lemke Heating Company which he successfully ran for over 50 years.He was also a member of the VFW Post #4237, of Youngstown, OH. Don was well known for his love of sports and his sense of humor, and when he was not intently watching a Cleveland Browns game, he could often be found singing a tune or reciting a humorous ditty. Known as “Legs”, he was an avid quartet singer and member of several quartets including the Youngstown Barbershop Chorus, Fitch Productions and his own group The Fish House 4, whose motto was “We Sing for the Halibut.” Don was always very active in his community. He served as Chairman of the Austintown, OH Park Board, was a member of the Austintown, OH Historical Society, and he spent 12 years as a Cub Master of Austintown Pack 44. Don was honored, in 1987, with an induction into the Austintown Hall of Fame. He was preceded, in death, by his first wife, Shirley Lemke, brothers; Arthur Lemke and Harold Lemke, sisters; Lorena Bartos and Carol Yungen, and one grandson; Kurt Lemke. Due to the Covid-19 Pandemic, there will be no services. Interment will be in Greenhaven Memorial Park in Canfield, Ohio with military honors to be held at a later date. Memorial Donations may be made, in Don’s name, to Freedom Service Dogs of America. Arrangements entrusted to THE TURNER FUNERAL HOME-ELLWOOD CITY, located at 500 6th Street. You may read the obituary, sign his guestbook, or send condolences at: www.turnerfh.com

Donald A. Lemke, 93, of Ellwood City, PA, formerly of Austintown, Ohio, passed away peacefully on May 8, 2020 at Heritage Valley Beaver Medical Center. He was the son of the late Arthur H. and Minnie Scherer Lemke and was born on January 27,... View Obituary & Service Information

The family of Donald A. Lemke created this Life Tributes page to make it easy to share your memories.

Send flowers to the Lemke family.