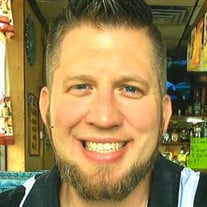 David Samuel Kerr, 32, of Ellwood City went home to be with his Lord and Savior the morning of November 10, 2017. Born March 11, 1985 in New Castle, he was the son of Samuel and Patricia Kerr. David was a lifelong resident of Castlewood. He attended Portersville Christian School until his senior year where he graduated from Shenango High School in 2003. David was employed with the USPS as a mail carrier. He was a member of Word of Life Family Church. David loved politics. He was proud to share his views and truly lived what he believed. David also enjoyed helping wayward fantasy sports enthusiasts set their lineups on Twitter, offering his informed opinion to anyone who asked. David"s work was well-known and well-respected; a quick Google search will provide links to dozens of his podcasts and articles from fantasy sports outlets across the world. Above all else, David was a man that cherished and adored his family. His greatest joys were those that came from his children. Through their eyes, he hung the moon and the stars. David leaves behind his beloved wife, Kelsey Kerr and their three children Jackson, Gracie, and Owen. He is also survived his mother, Patricia Kerr; one brother, Jason Kerr; three sisters, Patti (Bobby) Green, Kimberly (Tim) Holden, Dawn Marie (Mark) Giangiuli. He is also survived by a niece, Kayla Giangiuli; a nephew, Lincoln Kerr; his in laws, James and Connie Arkwright and Michael and Teri Anderson, as well as his sisters in law, Rebecca and Abby Arkwright; and several loving aunts and uncles. He was preceded in death by his father, Samuel H. Kerr. Visitation will be Tuesday, November 14, 2017 from 2-4 pm and 7-9 pm at Word of Life Family Church, 326 Laurel Blvd., New Castle. Services will be conducted Wednesday, November 15, 2017 at 11 am at the church, with Pastor Ted Saad officiating. Burial will follow in Harmony Baptist Cemetery, New Castle, PA. In lieu of flowers, memorial contributions may be made to Word of Life Family Church in care of the Kerr Family.

David Samuel Kerr, 32, of Ellwood City went home to be with his Lord and Savior the morning of November 10, 2017. Born March 11, 1985 in New Castle, he was the son of Samuel and Patricia Kerr. David was a lifelong resident of Castlewood.... View Obituary & Service Information

The family of David Samuel Kerr created this Life Tributes page to make it easy to share your memories.

David Samuel Kerr, 32, of Ellwood City went home to be with his...

Send flowers to the Kerr family.