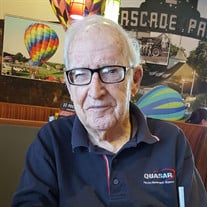 For more than three decades Charles "Charlie" R. Moser made sure Ellwood City area residents were provided with a wealth of local news. Moser, 92, the longtime editor of The Ledger, died Monday at Carriage Court Care Home in Shenango Township of natural causes. Moser was born Dec. 1, 1924, in New Castle to the late Fredrick and Bertha Moser. "He was a remarkable guy," said Dom A. Viccari, who joined The Ledger in 1955 and worked for the The Ledger for 52 years. "Charlie (Moser) was a prolific writer and was very interesting to talk to," Viccari said. "He was always writing." "He looked at the community and how its past impacted the present," said Veronica Pacella, director of the Ellwood City Area Public Library and former Ledger editor. "That historical perspective was real asset for an editor," she said. Pacella followed Moser as editor and spent about eight of her 15 years with The Ledger at that post. On June 1, 1967, Moser was named editor of The Ledger. At the same time William C. Kegel was named publisher. Previously both positions were held by Kegel"s father, William F. Kegel. Moser was 42 when he was named Ledger editor. Previously he was the city editor beginning in 1956, when he joined The Ledger, and he was named managing editor in 1958. He served in the U.S. Army during World War II and graduated from the Pennsylvania State University with a major in journalism in 1949. He was employed in the news department of the New Castle News for more than seven years before coming to Ellwood City. He was married to the former Frances Davenport of New Castle and they had five children: James, Judy, Dawn, Doug and Rick. Charles and Frances were married for 25 years before divorcing. She died on June 23, 2012. James and his wife, Laurene, reside in Atlanta; Judy Moser and her husband, David Rhing, have two children and reside in Pittsburgh; Dawn Moser and her husband, John Woods, reside in Shelton, Conn.; and Doug and his husband, Andrew Rubenoff, reside in New Haven, Conn. Rick Moser died in 1979. Moser remarried to the former Toni Houk and they adopted two children, Anthony Moser of New Castle, and Joseph Moser, who resides in Florida. He is survived by a brother, David, of Portland, Ore. He was preceded in death by two brothers, Ted and Bob, and a sister Alice. Moser was a local historian and authored a book concerning local history titled "Ellwood City Houses and the People Who Lived in Them." Copies of the book are available at the Ellwood City Area Historical Society"s History Center at 310 Fifth St. Moser also combined detailed histories of the local families that founded the Ellwood City area. A special Diamond Jubilee edition of The Ledger published in 1967 contained family histories as well as maps, compiled by Moser, showing where the early settlers set down roots, Viccari said. "The amount of research was unbelievable," Viccari said. "I learned a lot from Charlie (Moser)," Pacella said. "He was very patient and fair. He helped you get to where you needed to be when writing a story. He guided you. "He loved the history of Ellwood City and that was a huge part of who he was," Pacella said, noting that his book on Ellwood City houses is read and looked for by library patrons. "He also kept the newsroom lively and he put his stamp on the newspaper, making it the success it was," Pacella said. "He had a lot of knowledge and how to be a local newspaper. He understood the importance of local news." After leaving The Ledger in 1987, Moser continued to collect local history. He was also an avid bowler and wrote about the dozens of local bowling leagues on a daily basis. On any single day, there were hundreds of names and bowling scores published in The Ledger. While he enjoyed bowling, he also liked golfing, his daughter Judy Moser said. "He did love it (golf) and watched golf on television. Even a few weeks ago he asked me when I would take him golfing," she said. Private services will be conducted for Moser and the family asked that memorial contributions be made to the Ellwood City Area Public Library or a charity of their choice. Turner Funeral Home is entrusted with arrangements.

The family of Charles R. Moser created this Life Tributes page to make it easy to share your memories.

For more than three decades Charles &quot;Charlie&quot; R. Moser made...

Send flowers to the Moser family.