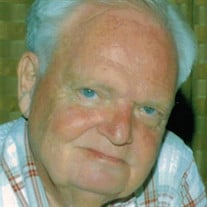 Carl W. Bender, Jr., 88, of Neshannock Township, passed away peacefully on Friday, December 29, 2017 at the Avalon Nursing Center. He was born November 18, 1929 to the late Carl W. Bender, Sr. and Olive Brisbin Bender. Carl was a 1947 graduate of New Castle High School and graduated from Youngstown University in 1955. He was the owner of C. Bender Real Estate and worked at the Lawrence County Court House as a real estate assessor. Carl was a proud US Navy veteran, serving in the Korean War. He was a member of First Assembly of God Church in New Castle where he served as a board member and Sunday School Superintendent. He had a love for music and was particularly proud to have been one of the surviving members of the "Singing Seven". In addition to his parents, he was preceded in death by one brother, Gilbert L. Bender. He is survived by his loving wife of 65 years, Grace J. Lambo Bender, as well as three sons; William M. (Joyce) Bender of Moon Township, Bradley A. (Debra) Bender of Beaver, PA, and Patrick J. (Carol) Bender of Bethel Park, PA, and by one daughter: Luanne L. (James) Goodrich of New Castle. Five grandchildren; Allison (Rick) Davison, Aaron (Laura) Bender, Lisa (Thomas) Peters, Louis Goodrich and Abigail Bender survive, as well as three great grandchildren. Friends will be received from 2:00 "“ 4:00 P.M. on Tuesday, January 2, 2017 at the First Assembly of God Church, 2021 Pulaski Road, New Castle where services will be conducted at 4:00 P.M. Tuesday with Rev. Scott Frederick, officiating. Burial will be in Graceland Cemetery, New Castle. In lieu of flowers, memorial donations may be made in his name to the First Assembly of God Church; or to the City Rescue Mission, 319 S. Croton Avenue, New Castle PA 16101. Arrangements are entrusted to the TURNER FUNERAL HOME, 500 Sixth St., Ellwood City, PA. You may read the obituary, sign his guestbook, or send condolences at: www.turnerfh.com

The family of Carl W. Bender Jr. created this Life Tributes page to make it easy to share your memories.

Send flowers to the Bender family.