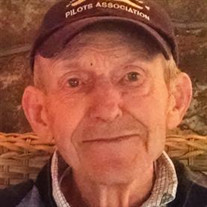 Bernard Wise Carbeau, 92, of Ellwood City (Marion Township, Beaver County), passed away peacefully on Sunday morning, January 28, 2018. He was at his home, surrounded by his loving family. Ben was born in Ellwood City on April 1, 1925 to the late Charles William Carbeau and the late Florence Wise Carbeau. He was a 1943 graduate from Lincoln High School in Ellwood City. He went on to earn a B.S. degree in Commerce from Penn State University in 1950. From 1944-1946 he enlisted in the US Navy during World War II, serving in the Atlantic on the destroyer USS H.J. Ellison. Much of Ben"s professional life was devoted to advancing modern construction methods. He joined his father at Universal Manufacturing Corporation in Zelienople, and is credited for importing America"s first tower crane in 1957, which became a lifelong pursuit. Ben was also an avid pilot, serving as charter member of Condor Aero Club of Zelienople in 1957, and was 2007 AOPA Pilot of the Year. He also proudly maintained Bilbobern Farms and its Angus cattle breading program. He was a longtime member of Trinity Lutheran Church in Ellwood City, where he had chaired its building council. He is especially remembered as a devoted husband and father. He is survived by his loving wife, Shirley Teets Carbeau, whom he married August 12, 1950. Also surviving are his children: C. William Carbeau III and his wife Karen (Naples, FL), Cynthia C. Caldwell and her husband David (Ellwood City, PA), Lore C. Flynn and husband Charles (Amissville, VA), and Mark B. Carbeau and wife Cheryl (Concord, MA). He is survived by 13 grandchildren as well as nine great grandchildren. The last of his family, he was preceded in death by two brothers: Capt. Charles William Carbeau, Jr., US Marine Corps, killed at the battle of Saipan on July 5, 1944 in WWII; and Robert Louis Carbeau. The family will receive friends from 4:00 P.M. until 7:00 P.M. on Thursday, Feb. 1, in the TURNER FUNERAL HOME, 500 Sixth Street, Ellwood City. Friends also may call from 10:00-11:00 A.M. on Friday, Feb. 2 at the Trinity Evangelical Lutheran Church, 207 Spring Avenue, Ellwood City, where a funeral service of Ben"s life will begin at 11:00 A.M., with his pastor, the Rev. Peggy Suhr-Barkley, officiating. Full military rites will be observed by the Veterans" Honor Guard, at the church. He will later be entombed in the Zelienople Community Mausoleum. Memorial donations may be made to the Trinity Lutheran Church Memorial Fund, 207 Spring Avenue, Ellwood City PA 16117, or to the Alzheimer"s Foundation of America (alzfdn.org). You may read his obituary, sign the guestbook, or send condolences at: www.turnerfh.com. (please omit the underlines)

Bernard Wise Carbeau, 92, of Ellwood City (Marion Township, Beaver County), passed away peacefully on Sunday morning, January 28, 2018. He was at his home, surrounded by his loving family. Ben was born in Ellwood City on April 1, 1925 to the... View Obituary & Service Information

The family of Bernard Wise Carbeau created this Life Tributes page to make it easy to share your memories.

Send flowers to the Carbeau family.