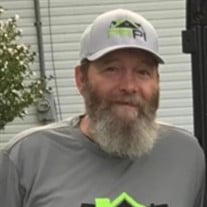 Benjamin R. Anderson IV, 60, passed away at his home on Saturday, January 9, 2021 following a tremendous 3-year battle with cancer. He was the son of the late Benjamin Anderson III, who passed away on November 26, 2020, and Donna (Scheidemantle) Anderson of Zelienople. In addition to his mother, he is survived by his loving wife of 35 years, Robin (McCartney) Anderson; his daughter Brooke (David) D’Angelo of Mars; his son Joe (Megan) Anderson of Ellwood City; his grandchildren; Domenico, Ginnaro and Kamila D’Angelo; Joey, Reese, Casey and Demi Anderson; brothers William (Laura) Anderson of Center Twp., and Douglas (Lori) Anderson of Ellwood City; sisters; Pamela (Robert) Ottaviani of Ellwood City, Kimberly Smith of Zelienople, and Anita (Fred) Orozco of Petrolia Sisters-in-law, Beth (Rocky) Gibbons; Krista (Alan) Franz as well as over 30 beloved nieces and nephews. Ben was a 1979 graduate of Riverside High School and a lifelong truck driver. He was a force of nature, fiercely protective and loyal to his family and friends. He loved spending time with his grandkids especially at the family camp in Pymatuning. If any of the kids wanted to do something, Pa made it happen. He loved working on and riding his Harley Davidson motorcycles and participated in many fundraiser rides. He rebuilt his father’s 1959 Harley taking it back to mint condition and then proudly riding around town. He could be counted on whenever you needed a hand and there was no better person to call your friend. The twinkle in his eye let you know when he was up to something and if you were around him there was no resisting what was sure to be a fun time. In addition to his father, he was welcomed at the Gates of Heaven by his maternal and paternal grandparents; his brother-in-law, Burton Smith; and his niece, Faith Anderson as well as many special family and friends. The family would like to thank all of the doctors and nurses that have helped in his care throughout his 3-year battle. A private service is planned for immediate family members. Arrangements entrusted to THE TURNER FUNERAL HOME located at 6th and Park in Ellwood City.

Benjamin R. Anderson IV, 60, passed away at his home on Saturday, January 9, 2021 following a tremendous 3-year battle with cancer. He was the son of the late Benjamin Anderson III, who passed away on November 26, 2020, and Donna (Scheidemantle)... View Obituary & Service Information

The family of Benjamin R. Anderson, IV created this Life Tributes page to make it easy to share your memories.

Benjamin R. Anderson IV, 60, passed away at his home on Saturday,...

Send flowers to the Anderson, family.