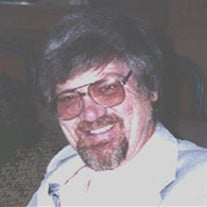 William A. Snyder, 75, of New Castle, (Shenango Township), passed away peacefully on Monday evening, July 2 2018 at the Brighton Rehabilitation and Wellness Center in Beaver . He was born in Ellwood City on August 12 1942 to the late Robert and Norma Baker Snyder. Bill belonged to the former Church of the Nazarene in Ellport. He was a graduate of Lincoln High School, class of 1960. He then served in the US Air Force from 1960-62. Until his retirement, Bill worked for many years mainly as a welder at the former Babcock and Wilcox Tubular Products Co. plant in West Mayfield. Bill enjoyed hunting and fishing. He is survived by his wife of 33 years, Virginia M. Hilliard Snyder. They were married on April 9 1985. Also surviving are two stepdaughters and their husbands: Linda (and Tod) Hilliard Beegle of Beaver Falls, and Patricia (and Bruce) Hilliard Scheidemantle of Ellwood City. One sister, Wanda Sutch of Ellwood City, and three sisters-in-law survive: Mary Esther Shannon, JoAnn Snyder, and Veda Mae Michaels as well as seven step grandchildren: Joel Hilliard, Anna Schooley, Ashley McNamara, James Scheidemantle, Bruce Scheidemantle Jr., Lisa Gibbons, and Connie Smith. Nine step great grandchildren also survive. In addition to his parents, Bill was preceded in death by one sister, Betty Dennison, and three brothers: Robert Snyder, and George and Fred Shannon. No public visitation is planned, and a private memorial service will be held. Burial will be in Locust Grove Cemetery. The TURNER FUNERAL HOME, 500 Sixth Street, Ellwood City, is entrusted with arrangements. Memorial donations may be made to the American Heart Association, 444 Liberty Ave., Pittsburgh PA 15222. You may sign his guestbook, or send your condolences at: www.turnerfh.com

William A. Snyder, 75, of New Castle, (Shenango Township), passed away peacefully on Monday evening, July 2 2018 at the Brighton Rehabilitation and Wellness Center in Beaver . He was born in Ellwood City on August 12 1942 to the late Robert... View Obituary & Service Information

The family of William A. Snyder created this Life Tributes page to make it easy to share your memories.

Send flowers to the Snyder family.