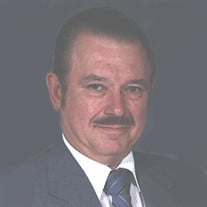 William F. Orr, 90, of Ellwood City (Franklin Township), went to be with his Lord and Savior on Wednesday evening, January 2 2019 at The Grove in New Wilmington. He was born in Ellwood City on November 25 1928 to the late John R. Orr, Sr. and Blanche Rasely Orr. After her death, he was raised by John and Anna Mae Newell Orr. With his brother, he owned and operated Orr"s Garage in Ellwood City. He retired from Herr Voss in Baden. Later, he drove cars for McElwains for 14 years. He was a longtime active member of Park Alliance Church, where he served on the Church Board, was a trustee, and elder. Bill was also active in his community, serving as Chairman of the Franklin Twp. Municipal Authority. He enjoyed fishing, hunting, boating, woodworking, and classic cars. He is survived by his loving wife of 69 years, M. Eleanor Jessop Orr, whom he married August 12 1949. Also surviving are one daughter and one son: Diane Orr Peters of Hermitage PA, and Douglas (and Melodee) Orr, of Midland City, Alabama. He is also survived by two sisters: Marlene (and LeRoy) Dierfield of New Castle; and Carol Lee Michael of Connoquenessing. Six grandchildren survive, and three great grandchildren. In addition to his parents, he is preceded in death by one son, Dwight Orr, on July 14 1973; one brother, J. Robert Orr Jr., and one great grandson, Jamisen William Gravatte. Friends will be received from 2-4 P.M. and 6-8 P.M. on Saturday, Jan. 5 in the TURNER FUNERAL HOME, 500 Sixth Street, Ellwood City. Services will be conducted at TURNERS on Sunday, January 6 2019 at 2:00 P.M. with the Rev. Wes Sherry, current pastor and Rev. John McCready, former pastor of Park Alliance Church, officiating. Burial will be in Slippery Rock Church Cemetery. Memorial donations may be made to the Park Alliance Church, 701 Jefferson Avenue, Ellwood City PA 16117, or to the donors" favorite charity. You may sign the guestbook, or send condolences online at: www.turnerfh.com

William F. Orr, 90, of Ellwood City (Franklin Township), went to be with his Lord and Savior on Wednesday evening, January 2 2019 at The Grove in New Wilmington. He was born in Ellwood City on November 25 1928 to the late John R. Orr, Sr.... View Obituary & Service Information

The family of William F. Orr created this Life Tributes page to make it easy to share your memories.

Send flowers to the Orr family.