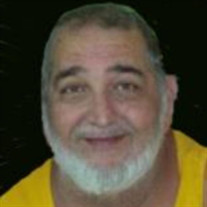 Timothy “Timbo” Schlemmer, 63, of Ellwood City, passed away at UMPC Jameson Hospital on January 6, 2021 He was the son of the late Donald and Mary (Wolfe) Schlemmer and was born December 5, 1957, in Ellwood City. He is survived by his wife, of 35 years, Diane Schlemmer; daughters; Autumn Schlemmer of Ellwood City, Samantha Harland and her husband Billy, Jr of Forsythe, GA, grandchildren; Dakota, Terry Gage, Ryder, Briella, Aiden, Izabella and Connor, Sister; Mary Lou Ehrenberg and her husband Michael Blair of New Castle, Frank Schlemmer and his wife Felicia of Oviedo, FL, Bill Schlemmer and his wife Jayne of Chippewa, Richard Schlemmer and his wife Patty of Centerville, GA, brother-in-law, Barry Meister, sister-in-law; Nancy Schlemmer. Tim was a 1976 graduate of Lawrence County Vo-Tech. He was a mixed chemist at Cemex, for 15 years, in Wampum. More than anything Tim loved spending time with his grandchildren he also enjoyed camping and football. He was a loving husband, father, grandfather, brother, and friend who will be miss by all who knew him. He was preceded by his son, Cory Schlemmer, one brother: Donald J. Schlemmer, one sister Beth Ann Meister Arrangements entrusted to THE TURNER FUNERAL HOME located at 6th and Park in Ellwood City.

The family of Timothy "Timbo" Schlemmer created this Life Tributes page to make it easy to share your memories.

Timothy “Timbo” Schlemmer, 63, of Ellwood City, passed away at...

Send flowers to the Schlemmer family.