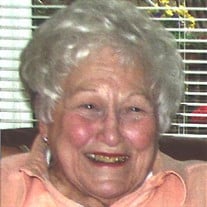 Shirley L. Tanner, 93, of Franciscan Manor, Beaver Falls, formerly of Ellwood City, passed away peacefully on Wednesday morning , February 8, 2017 at Franciscan Manor. She was born in Ellwood City on October 25 1923 to the late John Frederick Rutter and the late Margaret Straley Rutter. Shirley graduated from Lincoln High School in Ellwood City, and was a longtime active member of the First United Methodist Church in Ellwood City. Shirley cooked for the Wednesday Soup Luncheons at First Methodist for many years, and made many apple dumplings for the First Methodist Church booth at the Ellwood City Arts and Crafts Festival. Shirley loved her family, and especially loved being with her grandchildren. She was preceded in death by her late husband, M. E. “Gene” Tanner, who died September 11 1989. They were married on December 25 1944. She is survived by her loving daughter, Kim (and Larry) Clark of Cranberry Twp. Also surviving are four grandchildren: Caleb Tanner Clark, Abby Rutter Clark, and Strealy Duncan Clark, and Noah MacDonald Clark. One great grandchild, Makenzie Clark , also survives. She is also survived by two sisters: Maxine Eldridge of Buffalo NY, and JoAnn Shore in Florida. No public visitation is planned. Burial will be in Slippery Rock Church Cemetery. The TURNER FUNERAL HOME, 500 Sixth Street, Ellwood City, is entrusted with arrangements. Memorial donations may be made in her name to the Victory Family Church/Missions Fund, 21150 US Rte. 19, Cranberry Twp., PA 16066. You may read the obituary, sign the guestbook, or send condolences at: www.turnerfh.com

The family of Shirley L. Tanner created this Life Tributes page to make it easy to share your memories.

Send flowers to the Tanner family.