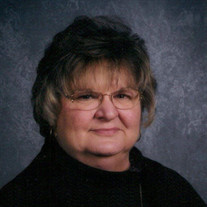 Sarah L. “Sally” (Brenner) Magill, age 72, of Ellwood City, PA, was welcomed into the arms of Jesus while surrounded by the love of her husband and son on Sunday morning, March 15, 2020, at Allegheny General Hospital in Pittsburgh, PA. She was born in Sharon, PA on September 26, 1947, daughter of the late Kenneth M., Sr., and M. Kathleen ”Kass” (Stanford) Brenner. Sally graduated from Lincoln High School in the class of 1965. In her teenage years, she enjoyed riding her horse, Champ, with her friends, the “Saddle Tramps,” through the woods of Portersville and the land which would eventually become McConnell’s Mill State Park. On April 3, 1971, she married her husband of almost 49 years, Blain W. “Bill” Magill, Jr., at Mountville Presbyterian Church in Portersville, PA. She managed the former First Seneca Bank in Franklin Township until retiring after the birth of her son. She later followed him through school at Riverside Beaver County School District, first in the kitchen, then as the secretary for the cafeteria at Riverside Middle School, and finally as a secretary at Riverside High School until her retirement in 2012. She attended Wiley Hill Baptist Church in Ellwood City. Sally enjoyed trips to the flea market in Rogers, OH, watching the eagle webcams in Decorah, IA, reading, NASCAR races, playing Words with Friends, and collecting bells and carousels. Most of all, she enjoyed time spent with her husband and son, whom she lovingly referred to as “her guys.” In addition to her husband, Bill, she is survived by her son, Cody B. Magill, of Tionesta, PA. She is also survived by two brothers and a sister: Kenneth M. “Skip” Brenner, Jr., (and Christine) of Ellwood City, Bruce E. Brenner (and Judy) of New Castle, PA, and Deborah J. Lehman of Broken Arrow, OK. Sally is also survived by her special Great Aunt Betty “Bing” Samida of Flushing, MI, as well as many nieces, nephews, cousins, and friends. Friends will be received from 2-4 & 6-8 P.M. on Thursday, March 19, 2020, at the TURNER FUNERAL HOME of Ellwood City, 500 6th Street, Ellwood City, PA 16117. Friends may also call from 10-11 A.M. on Friday, March 20, 2020, at TURNER’S, where services will be held at 11 A.M. with Lt. Col. Thomas Betlyn, pastor of Wiley Hill Baptist Church and Rev. Elizabeth Wallace, pastor of Wampum Presbyterian Church and close family friend, officiating. Interment will be in Mountville Cemetery in Portersville. Sally’s family wishes to thank the doctors, nurses, and staff in the Cardiothoracic Surgery ICU at Allegheny General Hospital for the exceptional, compassionate care they provided over the last several weeks. Memorial contributions may be made to the Butler County Humane Society, 1015 Evans City Road, Renfrew, PA 16053. Messages of sympathy may be left at www.turnerfh.com.

Sarah L. &#8220;Sally&#8221; (Brenner) Magill, age 72, of Ellwood City, PA, was welcomed into the arms of Jesus while surrounded by the love of her husband and son on Sunday morning, March 15, 2020, at Allegheny General Hospital in Pittsburgh,... View Obituary & Service Information

The family of Sarah "Sally" Magill created this Life Tributes page to make it easy to share your memories.

Send flowers to the Magill family.