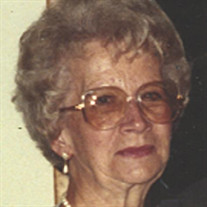 Sara M. Fowler Chesko Bowers, 93, of Ellwood City (Franklin Twp.), passed away peacefully on Wednesday morning , June 20, 2018 at Trinity Oaks Care Center in Beaver PA. She was born in Warrendale PA on August 30 1924 to the late Glen and Lois Arnold Fowler. Sara was a 1943 graduate of Lincoln High School in Ellwood City. She had belonged to the former Knox Presbyterian Church in Franklin Twp. from 1929 until it closed in 2015, and lately attended Riverview Country Chapel. For 18 years, Sara worked on the custodial staff at Riverside High School. Sara made many beautiful handmade quilts, and she also collected antiques, played golf and was skilled in archery. Sara loved playing cards with son, Randy and his wife Janice, and daughter Lynda and her husband Albert and her granddaughter Lisa. She was preceded in death by her first husband, Rudolph Chesko, whom she married June 19 1943. He died on July 7 1991. She was also preceded in death by her second husband, Clyde L. Bowers, who died November 3 2016. Sara is survived by two sons, one daughter, and by three daughters-in-law: Randall (and Janice) Chesko of Ellwood City (Franklin Twp.); Scott (and Lori) Chesko of Lenoir, NC; Lynda (and Albert) Oliver of Penfield NY; and Judy Chesko of Beaver. Six grandchildren survive: Lisa Chesko, Randy (Sharon) Chesko, Beth (Bruce) Unks, Stephen (Kirsty) Chesko, Carrie (Rob) Gurell, Michael (Siobhan) Oliver; and nine great grandchildren also survive: Sierra, Brielle, and Jordan Chesko; Maelyn, Evan, and Nolan Unks; William and Aria Chesko; and Piper Gurell. One sister, Ila Schuster, of Ellwood City, also survives. In addition to her husbands, Sara was preceded in death by one son, Richard Chesko, who died October 7 2014; and by two sisters, Mary Lou Watson, and Betty J. Rice. Friends will be received on Saturday, June 23 2018 from 4:00 P.M. until 7:00 P.M. in the TURNER FUNERAL HOME, 500 Sixth Street, Ellwood City. Burial will be in North Sewickley Cemetery. Memorial donations may be made to the donors" favorite charity. Special thanks are extended to her wonderful neighbors, Joe and Cathy Olayer, Bob and Barb Laudo, for the many things they did for her, and the family thanks the staff at Trinity Oaks Beaver and Gateway Hospice, especially her nurse Sierra Mason, for their excellent care. You may read her obituary, sign the guestbook, or send your condolences at: www.turnerfh.com

The family of Sara M. Fowler Chesko Bowers created this Life Tributes page to make it easy to share your memories.