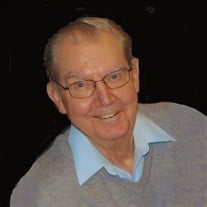 Robert L. Wymer, 87, of North Sewickley, passed away peacefully on Wednesday morning, May 15, 2019 at the Providence Care Center in Beaver Falls. He was born in Ellwood City on October 2, 1931 to the late Chester Wymer and the late Adella Dietrich. He graduated from Lincoln High School in 1950, and served in the US Navy during the Korean War. He was employed at the former Babcock and Wilcox Tubular Products Co. in Beaver Falls as a millwright foreman. Bob was a member of Concord United Methodist Church, and was an avid hunter, golfer, and bowler. He was a member of the American Legion and the V.F.W. in New Galilee. He is survived by his wife, of 63 years, Marjorie McAnallen Wymer, whom he married October 17, 1955. He is also survived by three daughters: Belinda (Charles) Gibbons, and Paula (Gregory) Swarmer, all of North Sewickley; and Chris (Russell) Tress of New Castle. Nine grandchildren and ten great grandchildren also survive. In addition to his parents, he was preceded in death by one son, Kenneth Blake Wymer, at birth; a daughter, Laureen Bowman; and by a grandson, Robbie Haswell. He was also preceded in death by two brothers: Donald and Raymond Wymer. Friends will be received from 2-4 and 6-8 P.M. on Friday, May 17, in the TURNER FUNERAL HOME, 500 Sixth Street, Ellwood City. Services will be conducted at 11:00 A.M. on Saturday, May 18, 2019 at Concord United Methodist Church in North Sewickley, with Rev. Josh Nash, Assistant Pastor, officiating. Burial will be in the Concord United Methodist Church Cemetery. Full military rites will be observed by the Veterans Honor Guard at the church. You may sign his guestbook, or send your online condolences at: www.turnerfh.com

Robert L. Wymer, 87, of North Sewickley, passed away peacefully on Wednesday morning, May 15, 2019 at the Providence Care Center in Beaver Falls. He was born in Ellwood City on October 2, 1931 to the late Chester Wymer and the late Adella... View Obituary & Service Information

The family of Robert L. Wymer created this Life Tributes page to make it easy to share your memories.

Send flowers to the Wymer family.