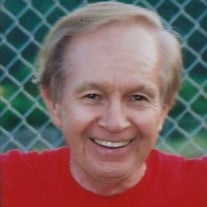 Robert K. Puzz, 94, of Ellwood City, went to be with his Lord and Savior on Sunday, October 10, 2021 at Avalon Place Nursing Center in New Castle. He was born on June 11, 1927 to the late John P. and Hilma (Mackey) Puzz. Robert “Bob” is survived by his daughter, Leigh Russell of Cranberry Township, grandsons Jonathan Russell and wife Elizabeth of Richmond, VA, Michael Russell of Los Angeles, CA, and great grandson, Luke Russell. Bob attended Lincoln High School and was a World War II Veteran, serving in the US Army as a Sergeant with the Mounted Horse Troopers. He was an employee at Aetna Standard Engineering Company and later at Babcock and Wilcox prior to his retirement in1986. In his youth, he enjoyed roller skating, weightlifting, and working with horses. He was also a member of the Lake Milton Boat Club, where he enjoyed waterskiing. He was known in his neighborhood for his immaculate lawn and beautiful flowers. Bob was a devoted husband, father, and grandfather, spending countless hours attending his grandsons’ sports practices and games. He will be greatly missed by all who had the privilege of knowing him. He was preceded in death by his wife Shirley (Evans) Puzz, his son-in-law, Chris Russell, and brothers, Arthur Puzz, Rev. James Puz, Edward Puzz, and William Lyytinen. The family would like to thank the staff at Avalon Place for the excellent and compassionate care extended to Bob during the past year. Friends and family will be received at Turner Funeral Home, 500 6th Street in Ellwood City, on Saturday, October 16, 2021, from 10:00am-11:30am, followed a Funeral Service at 11:30am at Turners, with Rev. Darren Bowers of Northway Christian Community officiating followed by Military Honors, rendered by the Veteran’s Honor Guard. Interment will follow in Locust Grove Cemetery. In lieu of flowers, memorial donations may be made to the Salvation Army or Cornerstone TV. Arrangements entrusted to the TURNER FUNERAL HOME located at 6th and Park in Ellwood City.

The family of Robert K. Puzz created this Life Tributes page to make it easy to share your memories.

Send flowers to the Puzz family.