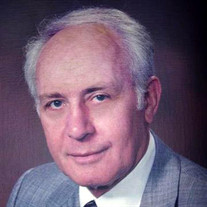 On Thursday, June 20 2019, local Real Estate agent and Businessman Robert W. (Bob) Powell, loving husband of Helen Bauder Powell, passed away peacefully at his home , age 97. He was born on November 17 1921 in Ellwood City, to the late William E. and Catherine Boggs Powell. Mr. Powell is survived by his wife of 76 years. Survivors include a son, Zachery (Jacqueline) Powell, and a daughter, Susan (Terry) Campbell, daughter-in-law, Pamela Powell, and a sister, Joan (Bill) Mould. Surviving grandchildren include: Tiffany (Michael) Horanski, Ryan (Jill) Campbell, Sarah (Robert) Lynch, Robert Powell, Ashlee (Aaron) Gray, Amanda (Jason) Brosk, and Tyler Powell. Surviving great grandchildren: Aidan Horanski, Ella, Olivia, and Jackson Lynch, Preston and Evan Powell, Connor and Carson Gray, Jacob and Addison Brosk. Mr. Powell was preceded in death by a son, Timothy Bauder Powell (2017), a brother Donald Powell (Ruth), and a sister Catherine (Robert Cooper). Bob graduated from Lincoln High School in 1940, where he played football. He played tight end on the 1939 Ellwood City Beaver Valley Championship team. He attended Albion College in Michigan on a football scholarship. After his freshman year, he enlisted in the US Army Air Corps on February 5 1941. He spent 22 months in combat with the 311th Fighter Squadron of the 58th Fighter Group in the Southwest Pacific Theatre of operations during World War II. He completed 185 combat missions and received the following decorations: Distinguished Flying Cross, the Air Medal, with three Oak Leaf Clusters, Philippine Liberation Medal with star, South Pacific Theatre Ribbon with 4 Campaign stars, American defense Medal, WWII Victory medal, and Armed Service Reserve medal, retiring from the USAF Reserve with the rank of Lieut. Colonel. After leaving the service he worked for C.L. Bauder Motors, and Economy Chevrolet auto dealerships in Ellwood City. He entered the Real Estate/Insurance business in 1956 with the Ellwood Agency, then purchased the agency in 1963, known as Ellwood Agency/R.W. Powell Real Estate. Robert worked until the age of 95, with his son, Zak, who now continues the legacy. Mr. Powell was an active member of Trinity Lutheran Church. He was best known for his work in the community. He served many years on the Ellwood City Hospital Board of Directors, Lawrence County Planning Commission, and the Ellwood City Area Chamber of Commerce Board, both of which he was a past president. For his service to Ellwood City, he received the Chamber"s highest award, the Distinguished Service Award. He was a member of the Ellwood City Lions, F.& A.M. # 599, Ellwood-Parian Lodge, Syria Shrine, New Castle Consistory, and N.R.A. He had served as Secretary of the Ellwood City Industrial Corporation, and Lawrence County Industrial Development Corporation. As a realtor, he was instrumental with bringing to Ellwood City, the R.J. Schill Manor, and the McDonald"s among other developments. Mr. Powell was a member of the Lawrence Co. Board of Realtors, National Assn. of Realtors, licensed residential and commercial appraiser, working with many lending institutions throughout the area. Community and service were Mr. Powell"s passion, and he made the great city of Ellwood and its people his priority for almost 98 years. Friends and family will be received on Monday June 24 2019 from 4:00- 8:00 P.M. in the TURNER FUNERAL HOME, 500 Sixth Street, Ellwood City. On Tuesday June 25 2019, friends will be received at Trinity Lutheran Church, 207 Spring Avenue, Ellwood City, from 10:00 until time of services at 11:00 A.M. with Pastor Peggy Suhr-Barkley, officiating. Burial will be in Locust Grove Cemetery, North Sewickley. In lieu of flowers, memorial donations may be made to Trinity Lutheran Church or Ellwood City Historical Society. Full military honors will be conducted by the US Air Force and the Veterans Honor Guard at the church at about Noon Tuesday. Members of F.& A.M. #599, Ellwood-Parian Lodge are asked to meet on Monday evening before a service at 8:00 P.M. You may sign his guestbook, or send your condolences online at: www.turnerfh.com

The family of Robert W Powell created this Life Tributes page to make it easy to share your memories.

Send flowers to the Powell family.