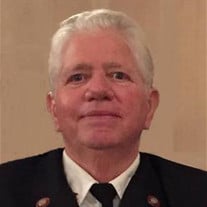 Richard C. “Dick” Streckeisen, 73, of Ellwood City, went to be with the Lord on Sunday, April 2, 2017 at his son’s residence in Castlewood . He was born in New Castle on July 12 1943 to the late Donald C. and Mary E. Bair Streckeisen. Dick graduated from Lincoln High School, with the class of 1961. He was employed for over 35 years, as a machine operator and shipper at the Ellwood City Forge Co. (Ellwood Group) until retiring in 2003. He was a veteran of the US Army, in the 82nd Airborne Battalion, serving during the Vietnam War era at Fort Bragg. “Uncle Dick” was a proud member of the Ellwood City Vol. Fire Department, with 35 years service. For many years, he operated the aerial truck. At the annual Fire Department dinner in February 2017, he was honored by his fellow firemen as “Fireman of the Year”. Dick believed in service to his community first and foremost. He served on the Carpenter’s Project; Samaritan’s Purse at Hurricane Katrina; member of “Over the Hill Gang” that built wheelchair ramps for the community; driver for Meals on Wheels; and member of Over the Hill Gang at Air Fitness. He was an active member of Park Alliance Church. Dick enjoyed spending time with his family. He is survived by his wife of 51 years, Jacqueline “Jackie” A. Carroll Streckeisen, whom he married on April 2 1966, and by two sons and one daughter, and their spouses: Donald Streckeisen of Ellwood City ; Jason (and Angela) Streckeisen of New Castle; Tara (and Ron) Spiker of Fombell . Eight grandchildren survive: Amanda (Emir) Palafox; Sarah (Zach) Arkwright; Rick (Dayna) Spiker; Julie (Ryan) Moran; Daniel Spiker ; Jarred (Hayley) Streckeisen; Johnathan Spiker; Jorden Streckeisen. Two great grand daughters also survive: Kailynn Rae Spiker and Ellie Mae Arkwright. He is also survived by one sister, Mary Ann Streckeisen. In addition to his parents, Dick was preceded in death by his daughter-in-law, Jennifer Streckeisen. Friends will be received from 1-4 and 6-9 P.M. on Tuesday, April 4, 2017 in the TURNER FUNERAL HOME, 500 Sixth Street, Ellwood City. Additional visitation will be from 10-11 A.M. on Wednesday April 5 at TURNERS. Services will be conducted at 11:00 A.M. on Wednesday, April 5, at TURNERS, with the Rev. John McCready, pastor of Park Alliance Church and Rev. Jeff Mackay of Harmony Baptist Church, co-officiating. Memorial donations may be made to the ALS Association of W. PA, 416 Lincoln Avenue, Pittsburgh, PA 15209; or the Ellwood City Vol. Fire Dept., 411 Sixth Street, Ellwood City PA 16117. Full military rites will be observed at TURNERS by the Vietnam Veterans of America, Beaver Valley Chapter # 862. They should meet at TURNERS by 10:30 A.M. Wednesday. You may read the obituary, sign the guestbook, or send condolences at: www.turnerfh.com

The family of Richard C. "Dick" Streckeisen created this Life Tributes page to make it easy to share your memories.

Send flowers to the Streckeisen family.