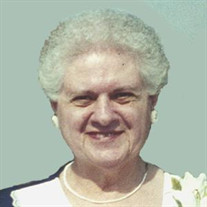 Olga M. Lemanski, 90, of Ellwood City, passed away peacefully on Saturday evening, November 4, 2017 at The Grove in Harmony. She was born in Ellwood City, on March 30, 1927 to the late George and Regina Koenig Miller, and was raised by the late Wilhelm and Anna Schuller. She was a graduate of Lincoln High School in Ellwood City. She shared 57 years of marriage with the late Sylvester "Sud" Lemanski, who passed away on October 29, 2004. Olga was a member of St. Paul"s Evangelical Lutheran Church and the Ellwood City Saxon Ladies Auxiliary. She enjoyed attending bingo and was a loving mother and grandmother. Olga was the last of her family. In addition to her parents and husband, she was preceded in death by eight sisters; Regina Ferrese, Hilda Eppinger, Margaret Berendt, Wilhelmina Losch, Dorothy Racz, Goldie Evans and Freda Ruby. She was also preceded by two brothers; George Miller and Frederich Miller (who died in infancy); as well as a son, Larry W. Lemanski. She is survived by two daughters; Helen (Larry) Houk, of Chewton and Sylvia (Charles) Stillwagon, of Ellwood City, as well as one son; Steven Lemanski, Sr. of Ellwood City. She is also survived by nine grandchildren, nineteen great grandchildren and one great-great granddaughter. Friends will be received from 2-4 and 7-9 P.M. on Tuesday, November 7, in the TURNER FUNERAL HOME, 500 Sixth Street, Ellwood City. Services will be conducted at 11:00 A.M. on Wednesday, November 8, at TURNERS, with Rev. Robert A. Keplinger of English Lutheran Church, Zelienople, PA officiating. Memorial contributions may be made to St. Paul"s Lutheran Church, PO Box 695, Ellwood City, PA 16117 Burial will follow in Locust Grove Cemetery. You may read the obituary, sign her guestbook, or send condolences at: www.turnerfh.com

Olga M. Lemanski, 90, of Ellwood City, passed away peacefully on Saturday evening, November 4, 2017 at The Grove in Harmony. She was born in Ellwood City, on March 30, 1927 to the late George and Regina Koenig Miller, and was raised by the... View Obituary & Service Information

The family of Olga M. Lemanski created this Life Tributes page to make it easy to share your memories.

Send flowers to the Lemanski family.