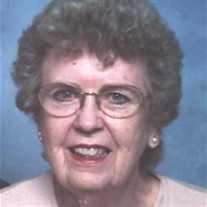 Norma Jean Nye, 86, of New Castle, (Shenango Twp.) passed away peacefully on Monday morning, January 16 2017 at her residence. She was born in Sharpsville, PA (Mercer Co.) on October 26, 1930, to the late Samuel Miller Reed Felton and the late Rachel Julia Shaffer Felton. Norma graduated from Sharpsville High School in 1948 and Westminster College in 1952. She began her career as a teacher for one year in Hermitage, then in the Ellwood City Area School District where she taught elementary music education at Hartman, North Side, Perry, Ewing Park and West End Schools for 32 years. She was the choir director at Calvin Presbyterian Church in Ellwood City for 23 years, as well as a longtime member of the First United Methodist Church. Norma enjoyed decorating her home as well as gardening. Her husband of 63 years, Robert E. Nye, passed away last week, on January 9, 2017. They were married in 1954. She was also preceded in death by a brother, Robert J. Felton. Norma is survived by her loving daughter, Janice Nye Greathouse of Ellwood City, and by her grandson, Jonathan R. Greathouse, of Slippery Rock, PA. Also surviving is one sister, R. Marilynn Hibshman of Sharpsville, PA and a brother-in-law, Ronald L. Nye of Ellwood City. Friends will be received from 6:00-8:00 P.M. on Wednesday, January 18 and from 10:00- 11:00 A.M. on Thursday, January 19 in the TURNER FUNERAL HOME, 500 Sixth Street, Ellwood City. Services will be conducted at 11:00 A.M. on Thursday, January 19, at TURNERS, with Pastor Chuck Cusick, retired; Mr. Thomas A. O’Brien, Minster of First Christian Church; and Rev. Matthew Bupp, Allegheny Healthcare At-Home Chaplain, co-officiating. Burial will be in St. Mark’s Lutheran Cemetery, Franklin Twp. Memorial donations may be made in her name to the Parkinson’s Disease Support Group, UPMC Jameson Health System, 3410 Wilmington Rd., New Castle, PA 16105. With her late husband, she was co-president of the support group. You may read the obituary, sign the guestbook, or send condolences at: www.turnerfh.com

Norma Jean Nye, 86, of New Castle, (Shenango Twp.) passed away peacefully on Monday morning, January 16 2017 at her residence. She was born in Sharpsville, PA (Mercer Co.) on October 26, 1930, to the late Samuel Miller Reed Felton and the... View Obituary & Service Information

The family of Norma Jean Nye created this Life Tributes page to make it easy to share your memories.