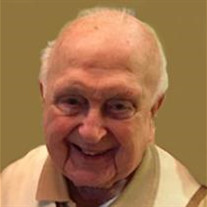 Dr. Milton L. Caplan was born in 1915, son of the late Jacob L. Caplan and Gertrude Goldman Caplan, in Ellwood City, and lived in Ellwood City most of his life, until 2003, at the age of 88, when he retired to West Palm Beach Florida. Dr. Caplan lived to 101, passing away on Tuesday March 7 2017. He would have celebrated his 102 birthday in May. He was preceded in death by his wife Dorothy Smith Caplan, as well as his two sons, Mark Jeffrey Caplan, and Ronald Jay Caplan. The last of his family, he was preceded by his brother, Dr. Aaron Caplan and a sister, Bertha Feldman. He is survived by his granddaughter, Elana Beth Caplan of Philadelphia and daughter in law, Rona Budovitch Caplan of Wilmington, Delaware. He is also survived by his devoted and loving nieces, nephews, and cousins: Barbara Caplan Azizo, Rebekah Caplan, Steven J. Feldman, Lisa Feldman Brill, David Cohen, and Alissa Cohen. His medical career spanned 61 years. For 56 of those years, he shared a family practice with his brother, Dr. Aaron Caplan, and the two together—in a combined 100 years of service— brought the finest medical care to their community. They were selfless physicians whose patients came first. House calls were a regular part of their practice. The Dr. Aaron and Milton L. Caplan Highway, a section of PA Route 288/Route 65 which leads into Ellwood City, was named in their honor for their years of service. Dr. Milton delivered more than 3000 babies, many of whom were named after him. The favorite part of his practice was obstetrics. He always said that his relationship with his patients were the most treasured aspects of his medical career. He graduated from Lincoln High School as Salutatorian of his class in 1932. He attended Geneva College for two years, and graduated from the University of Pittsburgh Medical School after earning bachelor of science and doctor of medicine degrees. He did his medical internship at Passavant General Hospital Pittsburgh. Dr. Caplan served from 1940 to 1946 during World War II, first as Battalion Surgeon in Iceland for three years; and after D-Day in the European Theater of Operations until the war ended. He was awarded the European-African-Middle Eastern Ribbon with 4 Bronze Stars, and the American Defense Medal. He was relieved from active duty with rank of Captain, and later promoted to rank of Major in the Officer Reserve Corps. He was a member of the Board of the Ellwood City Hospital, was one of the strong supporters in building the new hospital on Pershing Street and was instrumental in obtaining up to date equipment and encouraging a high standard of practice. Locally Dr. Caplan was a member of the Tree of Life Synagogue and B’nai B’rith. Professionally, he was a member of the Lawrence County and Pennsylvania Medical Societies, as well as the American Medical Association. The Ellwood City Chamber of Commerce named Dr. Caplan Outstanding Citizen of theYear in June, 1990. In honor of his 100th birthday, Ellwood City Mayor Anthony Court proclaimed May 10, 2015 as Dr. Milton L. Caplan Day. Friends will be received from 6-8 P.M. on Thursday evening, March 9 in the TURNER FUNERAL HOME, 500 Sixth Street, Ellwood City. Graveside services will be conducted on Friday, March 10 2017 at 10:00. A.M. at Beth Shalom Cemetery, Shaler Twp., Pittsburgh. In lieu of flowers, donations may be sent to: JCC of Wilmington Mark Caplan Youth Fund 101 Garden of Eden Road Wilmington, DE 19803 or Third Street Music School Settlement Dorothy Caplan Scholarship Fund 235 East 11th Street New York, NY 10003 or The Crohns and Colitis Foundation of America, 733 Third Avenue Suite 510 New York, New York 10017 Condolences to the Caplan Family may be sent to: Barbara Azizo 110 Girard Street Brooklyn, NY 11235 or Rona Caplan 529 Country Club Drive Wilmington, Delaware19803 You may read the obituary, sign the guestbook, or send condolences at: www.turnerfh.com

Dr. Milton L. Caplan was born in 1915, son of the late Jacob L. Caplan and Gertrude Goldman Caplan, in Ellwood City, and lived in Ellwood City most of his life, until 2003, at the age of 88, when he retired to West Palm Beach Florida. Dr.... View Obituary & Service Information

The family of Dr. Milton L. Caplan created this Life Tributes page to make it easy to share your memories.

Send flowers to the Caplan family.