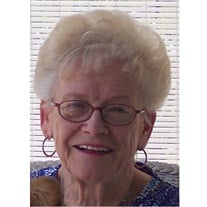 Mildred E. Blough of Daugherty Twp., formally of Ellwood City, passed away on December 25, 2019, her 90th birthday. Born in Power, West Virginia on December 25, 1929, she was the daughter of the late C. Curlis and Melba (Strickler) Howard. She was married to Edward J. Blough, who preceded her in death. As a young girl, Mildred moved with her family from West Virginia to Ellwood City, where she resided until August 2019. She was a 1947 graduate of Lincoln High School. Mildred was an avid interior decorator, a crafter, an accomplished seamstress, and an animal lover who was never without at least one pet in her household. She was a fiercely loyal and devoted wife and mother who will be greatly missed by all who were lucky enough to know her. She is survived by two daughters: Karen (Jim) Fogel of Ellwood City, and Melinda (Steve) Guzo of Daugherty Twp., and two sons: Kevin Christie of Ellwood City, and Charles (Sandra) Christie of Holdrege, Nebraska, 10 grandchildren, many great-grandchildren, and one great-great-grandson. In addition to her parents and husband, she was preceded in death by one daughter, Deborah Bennett, one brother, Charles Curlis Howard Jr., and two sisters, Martha Ippolito and Nancy Kiefel. The family will receive friends from 4:00-7:00pm, Monday, December 30, 2019 at the TURNER FUNERAL HOME ELLWOOD CITY. Funeral Services will be held at 10:00am, on Tuesday, December 31, 2019, at Turner’s with Pastor Dennis Arndt, officiating. Interment will be in the National Cemetery of the Alleghenies, Bridgeville, PA. In lieu of flowers, the family is requesting donations be made, in Mildred’s name, to the Lawrence County Humane Society.

Mildred E. Blough of Daugherty Twp., formally of Ellwood City, passed away on December 25, 2019, her 90th birthday. Born in Power, West Virginia on December 25, 1929, she was the daughter of the late C. Curlis and Melba (Strickler) Howard.... View Obituary & Service Information

The family of Mildred E. Blough created this Life Tributes page to make it easy to share your memories.

Send flowers to the Blough family.