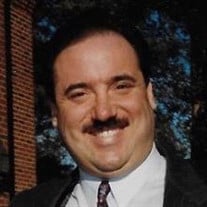 Michael Joseph Tomasello, 61, of Ellwood City passed away peacefully, at his home, on October 24, 2020, surrounded by his family. He was the son of Mary Ann (Faraone) Tomasello, and the late Dominick Tomasello. Mike was born on July 29, 1959, in Queens, New York. He graduated from Mater Christi High School in 1977, received an Associate Degree in Business from Queens College in 1980, and later earned a certificate from Hausman Technical School in Manhattan, with an emphasis on the AS-400 IBM mainframe computer system. Michael spent his career as an insurance agent. He held various licenses for accident, health, life, and fixed annuities, including Series 6, Series 63, and Series 7. He also held a broker/dealer license from Prudential Life Insurance Co. When working for United Insurance Group, he was recognized three times as the Pennsylvania Insurance Agent of the Year consecutively from 1993-95. He then went into management and was promoted several times before becoming the divisional manager in 1997. During his time with United Insurance Group, he won over 25 awards for outstanding sales. Michael was an excellent conversationalist who enjoyed giving consolation and advice to his family and friends. Much of his time was spent at the Cigar Shoppe of Ellwood City, watching sports and trying new cigars with friends. Michael was an avid fan of the New York Yankees and the Pittsburgh Steelers and Penguins. Even in the depths of his illness, Michael’s family was always his priority. He is survived by his wife; Adele (Simeoni) Tomasello, daughter; Marisa Tomasello, his son; Dominic Tomasello, all of Ellwood City; his mother; Mary Ann (Faraone) Tomasello, of the Bronx, NY, one sister; Linda Crupi and her husband James of Long Island, NY; and numerous nieces and nephews. Michael is preceded in death by his father, Dominick Tomasello. Special thanks is given for the excellent care of the nurses and aides of the Allegheny Home Care Hospice program. The family will receive friends from 4:00PM-9:00 PM on Tuesday, October 27, 2020 at the TURNER FUNERAL HOME, with funeral prayers given at 5:30pm by Kay Ann Bellissimo, Pastoral Assistant. A Mass of Christian Burial will take place at 10:00am, on Wednesday, October 28, 2020 at Holy Redeemer Parrish Church 415 Fourth Street Ellwood City, with Father Philip Farrell, officiating. Interment will be in Locust Grove Cemetery in Ellwood City. Due to the COVID-19 Pandemic, those who attend must wear a facemask and practice social distancing. Arrangements are entrusted to THE TURNER FUNERAL HOME located at 6th and Park in Ellwood City.

Michael Joseph Tomasello, 61, of Ellwood City passed away peacefully, at his home, on October 24, 2020, surrounded by his family. He was the son of Mary Ann (Faraone) Tomasello, and the late Dominick Tomasello. Mike was born on July 29, 1959,... View Obituary & Service Information

The family of Michael Joseph Tomasello created this Life Tributes page to make it easy to share your memories.

Send flowers to the Tomasello family.