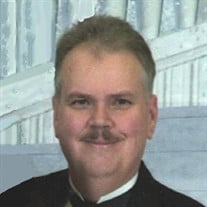 Michael S. Young, 61, of North Sewickley Twp, PA, went home to be with his Lord and Savior on Saturday, September 5, 2020. He was the son of the late William D. and Blanche M. (O’Brien) Young. He was born on January 15, 1959. He is survived by the love of his life, Valerie Young, his beloved daughter; Amanda Young and numerous cousins. Mike was a 1977 graduate of Riverside High School and earned his degree from Geneva College. He met and married the love of his life, Valerie Shaffer, on March 4, 1989 and they were married 31 years. Mike enjoyed traveling with his family, especially going to Walt Disney World and the beach. He was known, by all who knew him, as a dedicated and loving dad, to his daughter, Amanda and he never missed a school field trip, band concert, gymnastics show, parade, dance show and even supported her at her mock trials. During Amanda’s time in the marching band, he never missed a football game that she was marching in, nor anything at all that his daughter was a part of. He worked for WBVP in Beaver Falls and he was the producer of the wrap up show, for high school football. He was currently employed by Lutheran Senior Life and was the Multimedia Coordinator, for the Zelienople Campus. He loved all things sports, especially high school football and the Pittsburgh Steelers. He was also an avid bowler. He is preceded in death by his parents; William D. and Blanche M. O’Brien Young. The family will receive friends from 4:00-6:00pm, on Tuesday, September 8, 2020 at Turner Funeral Home. Due to the Covid-19 Pandemic, the Funeral Service will be private, with Pastor Dan Muir, officiating. Due to CDC regulations, mask or face coverings are required for those who will be attending. For those who are unable to attend, The funeral will be live streamed from the Turner Funeral Home Facebook page. In lieu of flowers the family is requesting donations, in Michael’s name, to the American Cancer Society. Arrangements entrusted to THE TURNER FUNERAL HOME located at 6th and Park in Ellwood City.

The family of Michael "Mike" S. Young created this Life Tributes page to make it easy to share your memories.

Send flowers to the Young family.