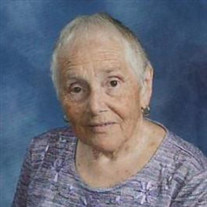 Marjory Ferrese, 86, of Ellwood City passed away Monday, November 2, 2020, surrounded by her family, at her home. She was the daughter of the late Leo and Hazel Irene (Himes) Schlemmer and was born on July 31, 1934, in Franklin Township. She is survived by her daughters; Cindy Harris of Virginia, Carol Ross and her husband Ronald of Chippewa, her son; Joe Ferrese and his wife Rosemarie of Ellwood City, grandchildren; Robert and Jason Harris and Carly Ross, three step grandchildren and eight step great-grandchildren. Marjory was the last living member of her family. She was a graduate of Lincoln High School, class of 1952. Marjory married the love of her life, Robert Ferrese in 1953, and they were married 53 years, at the time of his death, in 2006. She was a longtime member of Bell Memorial Presbyterian Church, where she taught Sunday School and volunteered her time to help the Jet Cadets and she also worked with the youth group, of her church. She was also a member of the former King’s Daughter Class. She was also a Den Mother. Marjory was also employed, over the years, at Miller’s Clover Farm Store, in Frisco, Original Dust Proof in Ellport, G. C. Murphy, in Ellwood City, McDonald’s and Burger King, in Ellwood. She was a loving, wife, mother, grandmother and great-grandmother. She was preceded in death by; her husband Robert Ferrese, her sisters; Ethel Bollinger, Elsie McKinney, June Shaffer, Frances Leona Radaker and son-in-law, Norman Harris. The family would like to express their appreciation to Gallagher Home Health and Gallagher Hospice for their constant care and concern during this difficult time. The family will receive friends from 3:00-6:00 PM, on November 5, 2020, with Funeral Services following at 6:00PM, at the TURNER FUNERAL HOME. Interment will be in Slippery Rock Church Cemetery, Wayne Twp. In lieu of flowers, donations can be made to Bell Memorial Presbyterian Church, in Ellwood City. Arrangements entrusted to the TURNER FUNERAL HOME located at 6th and Park in Ellwood City.

Marjory Ferrese, 86, of Ellwood City passed away Monday, November 2, 2020, surrounded by her family, at her home. She was the daughter of the late Leo and Hazel Irene (Himes) Schlemmer and was born on July 31, 1934, in Franklin Township. She... View Obituary & Service Information

The family of Marjory Ferrese created this Life Tributes page to make it easy to share your memories.

Send flowers to the Ferrese family.