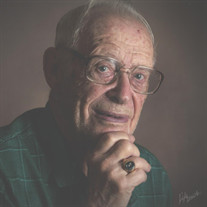 Lloyd Elmer Moyer, 93, of Schill Manor, Ellwood City, formerly of Fombell, entered into eternal rest on Saturday, October 7, 2017 at the Ellwood City Hospital. He was born in Fombell, Beaver County, on September 26 1924 to the late Elmer and Esther Herrmann Moyer. He married the late Phyllis Catherine Boots Moyer on June 12 1948. She preceded him in death in October 2014. Together they remained on the farm, and owned and operated Moyer Farm Dairy from 1959-1972. After selling the dairy, Lloyd worked at the Ellwood City Forge until his retirement. He continued working as needed as a parts runner for Inmetco, driver for Butler Auto Auction and for anyone who needed a ride anywhere. They moved to Schill Manor in 2012, where he enjoyed assisting his friend Dale Murin with tasks. Lloyd was a longtime attendee of Wurtemburg United Methodist Church, where he was active in the United Wesleyan Sunday School class, and the church"s apple butter festivals. He and Phyllis were active in the Sheer Luck card club and they volunteered with the Ellwood and Zelienople Meals on Wheels and the local Angel Food program. He also served for many years as a Franklin Township Supervisor. His pride and joy was his family, the dairy and the multitude of friends and customers he met while in business. No one was a stranger to Lloyd. In addition to his parents and wife, he was preceded by three brothers in infancy: Omar, Homer, and Donald, and by his daughter-in-law, Debbie Moyer. He is survived by three children: Bryan Moyer of Fombell; Stanley ( Debra) Moyer of Akron OH; and Barbara ( Sam) Miller of Huron OH. He is also survived by two grandchildren: Joshua ( Mandy) Moyer of Akron OH; and Kelly ( Jeff) Goshe of Moreland Hills OH; and seven great grandchildren: Caitlin, Christopher, Lucy, James, and Meredith Moyer; and Sylvia and Corinna Goshe, . Friends will be received from 2-4 and 7-9 P.M. on Tuesday, October 10, 2017 in the TURNER FUNERAL HOME, 500 Sixth Street, Ellwood City. Services will be conducted at 11:00 A.M. on Wednesday, Oct. 11 , at Wurtemburg United Methodist Church, 1244 Portersville Road, Ellwood City, with Rev. Andrew Shaffer, and his pastor, Rev. Chad Bogdewic, co-officiating. The family requests no flowers. Burial will be in St. John"s (Burry"s) Church Cemetery, Marion Twp. Memorial donations may be made in his name to the Wurtemburg United Methodist Church Memorial Fund, 1244 Portersville Road, Ellwood City PA 16117. The family extends its gratitude to VITAS Innovative Hospice Care and Ellwood City Hospital for their wonderful care. You may read the obituary, sign his guestbook, or send condolences at: www.turnerfh.com

Lloyd Elmer Moyer, 93, of Schill Manor, Ellwood City, formerly of Fombell, entered into eternal rest on Saturday, October 7, 2017 at the Ellwood City Hospital. He was born in Fombell, Beaver County, on September 26 1924 to the late Elmer and... View Obituary & Service Information

The family of Lloyd Elmer Moyer created this Life Tributes page to make it easy to share your memories.

Send flowers to the Moyer family.