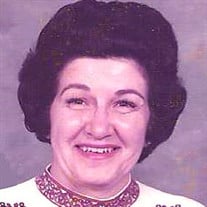 Lena Stanilla Bauder, 97, of Ellwood City, (Franklin Twp.) was called home to the Lord, on Sunday evening, November 19, 2017 at the Ellwood City Medical Center. She was born on January 2, 1920 in Lebanon, PA to the late Anna Arazan and Joseph Stanilla. She graduated from Lebanon High School in 1937, where she met her future husband, Willard E. Bauder, when he was stationed at Indiantown Gap before he was sent to Europe during World War II. She and Willard married on November 7, 1945. He passed away May 3, 1982. Lena was a longtime member of Trinity Evangelical Lutheran Church in Ellwood City. She was also active in local bowling leagues, particularly the Hits and Misses Bowling League, as well as volunteering for many years with Meals-On-Wheels. She worked for many years at the Ellwood Knitting Mills. In addition to her parents and husband, she was preceded by two sisters, Seda S. Kopecky and Mary S. Foltz; a brother, Peter A. Stanilla; as well as two brothers John and Joseph Stanilla, who died in infancy. Lena is survived by her daughter, Sally Ann Bauder Cortese and her son-in-law Joseph J. Cortese of Aleppo Township as well as a special, dear friend Diana "Suzie" Lowers of Knox Plan, Franklin Township. She is also survived by a brother-in-law, Eugene Barnhart of Portersville, PA; a nephew, Joseph S. (Marion) Foltz of Lebanon, PA; as well as many nieces, nephews, great nieces and great nephews. Friends will be received from 11:00am to 1:00pm on Wednesday, November 22, 2017 in the TURNER FUNERAL HOME, 500 Sixth Street, Ellwood City. Services will be conducted at 1:00 PM on Wednesday at TURNERS with Rev. Robert A. Keplinger, officiating. Burial will follow in Portersville Cemetery. Memorial donations may be made in her name to the Trinity Lutheran Church Memorial Fund, 207 Spring Avenue, Ellwood City PA 16117; St. Matthew"s Lutheran Church, 534 East Lehman Street, Lebanon, PA 17046; or the Salvation Army. You may read the obituary, sign her guestbook, or send condolences at: www.turnerfh.com

Lena Stanilla Bauder, 97, of Ellwood City, (Franklin Twp.) was called home to the Lord, on Sunday evening, November 19, 2017 at the Ellwood City Medical Center. She was born on January 2, 1920 in Lebanon, PA to the late Anna Arazan and Joseph... View Obituary & Service Information

The family of Lena C. Bauder created this Life Tributes page to make it easy to share your memories.

Send flowers to the Bauder family.