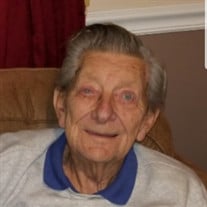 John “Jack” Bryan Hardy, 89, of Ellwood City, passed away, surrounded by his family, on Tuesday, December 1, 2020, at his home. He was the son of the late Ernest and Helen (Gallagher) Hardy and was born February 13, 1931 in Ellwood City. He is survived by his wife, of 47 years, Myrtle (Main) Hardy, children; Terri Emery and her husband Jim of New Castle, Woody Hardy and his wife Debbie Gibbs of Ellwood City, Timmy Hardy of Ellwood City, Debbie Piper and her husband George of Ellwood City, Diane Lutz of Ellwood City, Darlene McQuiston of Fombell, Dennis Agnew and his wife Kathy of Ellwood City, Dawna Fox and her husband Joe of Beaver Falls, 23 grandchildren,33 great grandchildren, and two brothers; Robert Hardy and his wife Ruth from Fombell and Bill Hardy and his wife Jan from Pittsburgh. He was a graduate of Lincoln High School and upon graduation he enlisted in the US Army and served proudly during the Korean War era. He married the love of his life, Myrtle Main, in 1974 taking on her six children and loving them and raising them, just as his own. He loved all sports, especially golfing and he introduced his grandson, Skyler Fox, to the love of golf and following his dreams. He played on the Oak Grove Softball League, for over 30 years. His fellow players gave him the nickname “Magic”. He was an avid bowler and was a member of many leagues over the years. He was a lover of all Pittsburgh sports, especially the Steelers, Pirates and Penguins. He was a kind and loving husband, father, grandfather, great-grandfather and friend to all who met him. “He was my hero, my father, and my friend” He was preceded in death by one son, Dale Agnew Interment will be in Grandview Cemetery, Beaver Falls. The family will receive friends on Thursday, December 3, 2020 from 2-4pm and 7-9pm with a Funeral Service to be held on Friday, December 4 at 11:00am with Pastor George Nagle officiating, at Turner Funeral Home-Ellwood City. Due to the Covid-19 Pandemic, those who are attending are required to wear a mask or face covering and practice social distancing. Arrangements entrusted to THE TURNER FUNERAL HOME located at 6th and Park in Ellwood City.

The family of John "Jack" Hardy created this Life Tributes page to make it easy to share your memories.

Send flowers to the Hardy family.