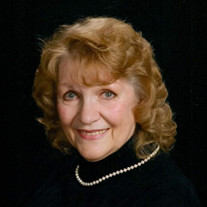 Jeannie Williams, 79, of Hamilton, Montana and formerly of Ellwood City, PA, went home to be with the Lord, at her home, in Hamilton, MT on February 27, 2020. She was the daughter of the late Curtis Wayne Kirkpatrick and Phoebe Marie (Kennedy) Kirkpatrick and was born on July 27, 1940 in Shenango Twp, PA. Jeannie is survived by her sisters; Judy Williams and Sally Bruce, four children and their families (Margie and husband Michael, Douglas and wife Sheri, Rhonda and husband Jack, Lanna and husband Scott), 17 grandchildren (Shawn, Josh, Chad, Richie, Cody, Zachary, Krystal, Nicole, Dustin, Patrick, Cory, Johnny, Andy, Garrett, Hunter, JoLynn, and Layne) and numerous great-grandchildren. Jeannie spent her youth growing up in the farmlands of Ellwood City, Pennsylvania, where she developed a distinct love for family and the country that would remain prevalent throughout her life. The values of diligence, honesty and generosity that are intrinsic in life on the farm became staples in Jeannie’s character that were glowingly apparent to anyone fortunate enough to know her. On September 23, 1957, Jeannie was married to Donald Williams in Cumberland, Maryland before the two of them settled and began a family back in Pennsylvania. The couple would later relocate to Maryland, where they would go on to establish several incredibly successful businesses. The effort and commitment they devoted to ensuring the success of these ventures served as a testament to their tireless resolve to create an enjoyable, prosperous life for their children, grandchildren, and later great-grandchildren. Jeannie would also go on to accomplish tremendous professional accolades individually, as was evidenced through the success she achieved in her numerous years of service at Comsat in Clarksburg, MD among other organizations. Jeannie’s most resounding accomplishments though, came as a result of her unparalleled and enduring love of her family. As a devoted mother of four children and grandmother to 17 grandchildren, Jeannie proved relentlessly that there was no role she valued more in life than that which came as a result of her motherhood. The resoundingly universal sentiment shared by anyone with whom Jeannie had even the briefest relationship was that she was the kindest, most selfless person they had ever known. It was this unwaveringly altruistic nature that was Jeannie’s most profound and enduring gift to the family she held so dear and is the legacy that will continue to live on in the family she leaves behind Despite her tireless dedication to serving as a remarkable wife, mother and professional, Jeannie was also an incredibly devout Christian. Upon relocating to Seymour, Missouri in 2004, Jeannie and her husband became members of the First Baptist Church, where they would not only strengthen their bond with the Lord, but also forge innumerable friendships that they would carry with them for the remainder of their lives. Along with her parents, Jeannie is preceded in death by her husband; Donald, brothers; Gregory Kirkpatrick, Richard Kirkpatrick, Clarence Kirkpatrick, and Wayne C. Kirkpatrick, and by one sister; Faye Kirkpatrick. The family will receive friends on Saturday, March 7, 2020 from 12:00-2:00pm with Funeral Services following at 2:00pm at the TURNER FUNERAL HOME-ELLWOOD CITY located at 500 6th Street.Interment will follow in Clinton Cemetery, in Wampum, PA. In lieu of flowers, the family is asking that donations be made in Jeannie’s honor to St. Jude Children’s Research Hospital, which can be made by visiting www.stjude.org/donate

Jeannie Williams, 79, of Hamilton, Montana and formerly of Ellwood City, PA, went home to be with the Lord, at her home, in Hamilton, MT on February 27, 2020. She was the daughter of the late Curtis Wayne Kirkpatrick and Phoebe Marie (Kennedy)... View Obituary & Service Information

The family of Jeannie Williams created this Life Tributes page to make it easy to share your memories.

Jeannie Williams, 79, of Hamilton, Montana and formerly of Ellwood...

Send flowers to the Williams family.