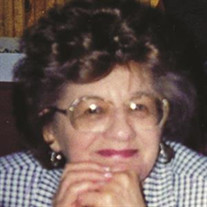 Helen Muntean Oliver, 87, of North Tower Road, (Franklin Township), Fombell, died peacefully at home on Tuesday evening, November 21 2017, surrounded by her family. Born March 5, 1930 in Canton, Ohio, Helen was the daughter of the late Nick Muntean Sr. and the late Elizabeth Toda Muntean. She was a member of the Park Alliance Church (Christian and Missionary Alliance) in Ewing Park where she helped in the kitchen for many years and was known for always baking delicious cookies for friends and family. She is survived by Albert H. Oliver, her husband of 67 years; son and daughter-in-law, Albert Jr and Lynda Oliver of Rochester, NY; daughter and son-in law, Colleen and Jeff Dunlap of Prospect; granddaughter Carrie Gurell and her husband Rob of Honeyoye Falls NY; grandson Michael Oliver and his wife Siobhan of Winston-Salem NC; and one great-granddaughter Piper Gurell. She grew up in a large family of twelve brothers and sisters and remained very close to them and her many sisters-in-law and brothers-in-law. Surviving are her brother and sister-in-law David and Norma Muntean; sister and brother-in-law Martha "Dolly" and Joseph Fotia; and sister-in-law Norma Muntean, all of Ellwood City. In addition to her parents, Helen was preceded in death by her brothers Nick and Alexander "Sam", twin brother John "Duke", and sisters Ann Blazak, Eleanor Montain (Muntean), Lucretia "Kate" Flugher, Vera Holder, Elizabeth "Betty" Balmer, and Mary Burgess. Friends will be received from 2:00 P.M. "“ 5:00 P.M. on Sunday, November 26, 2017 in the TURNER FUNERAL HOME, 500 Sixth Street, Ellwood City. Services will be conducted at TURNERS at 11:00 A.M. on Monday, Nov. 27, with her pastor, the Rev. John McCready, of Park Alliance Church, officiating. Burial will be in St. Mark"s Lutheran Cemetery, Franklin Twp. Memorial donations may be made in her name to Park Alliance Church, 701 Jefferson Ave., Ellwood City PA 16117. You may read the obituary, sign her guestbook, or send condolences at: www.turnerfh.com

The family of Helen E. Muntean Oliver created this Life Tributes page to make it easy to share your memories.