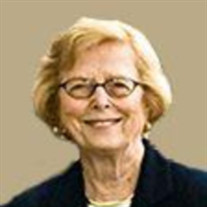 Helen M. Powell, 97, of Ellwood City, well known for her community spirit and accomplishments, passed away peacefully at her residence, on Thursday, June 18, 2020. She was born in Wurtemburg (Ellwood City), on October 26, 1922, the only child to the late Clifford L. “C.L” Bauder and the late Hilda M. Wallis Bauder. She was raised in Hazel Dell, (Ellwood’s North Side), then she moved to a farm in Wayne Twp, as a teenager. She was a graduate of Lincoln High School, class of 1941 and then she attended Southern Seminary in Buena Vista, VA. She then returned to Ellwood City, at the onset of World War II. In an article, in the Ellwood City Ledger, by Louise Carroll, Helen was described as being defined by family, church, and community. During the war, she worked for Curtis-Wright aircraft factory in Vanport, where she welded propellers for the P-47’s. Not only welding them, but inspected them and signing them, to bolster airman’s morale, including her husband’s, who was a fighter pilot, in that same aircraft. Helen married the love of her life, Robert W. Powell, in August 1943 and were married 75 years, until his death in 2019. Mr. Powell always supported Helen in all of her endeavors and projects. Trinity Lutheran Church has always been the center of her life. She and her husband were not only lifelong members but married in the church and Helen chaired the 100th anniversary celebration of the church, in 1995. In 1953, she was a charter member of the Town and County Garden Club. She was also a Master Gardner in Beaver County, completing a gardening course, at Penn State University. Her gardens, along Crescent Avenue and at her cottage along the Slippery Rock Creek were very well known. She founded the Municipal Women’s Club of Ellwood City, in 1954. She also devoted her time to the Ellwood City Area Historical Society, where she had been a Past President and the first recipient of the Henry Waters Hartman Historical Award, given very infrequently and only for meritorious service to the society. In her Ledger article, past ECAHS president, Andy Kindle called Helen a special person, who dedicated her time and talents to her community. Helen was also a long-time board member of the Ellwood City Hospital Auxiliary, Business and Professional Women (B.P.W.), the Girl Scout’s Board and was a lifetime member of Eastern Star #212. She worked alongside her husband, for 35 years, at the R.W. Powell Real Estate Agency. Although now retired, still took part in the business, now run by their son, Zackery Powell. Mrs. Powell is survived by a son; Zachery (Jaqueline) Powell, and a daughter; Susan (Terry) Campbell, daughter-in-law; Pamela Powell, grandchildren; Tiffany (Michael) Horanski, Ryan (Jill) Campbell, Sarah (Robert) Lynch, Robert O. Powell, Ashlee (Aaron) Gray, Amanda (Jason) Brosk and Tyler Powell, great-grandchildren; Aidan Horanski, Ella, Olivia, and Jackson Lynch, Preston and Evan Powell, Connor and Carson Gray, Jacob and Addison Brosk. She was preceded in death by her husband; Robert W. Powell and one son; Timothy Powell. The family will receive friends from 2:00-4:00pm on Saturday, June 20, 2020 with a Funeral Service following, at 4:00pm at The TURNER FUNERAL HOME 6th Street and Park Ave in Ellwood City, with Rev. Peggy Suhr-Barkley, officiating. Interment will be in Locust Grove Cemetery, in Ellwood City. The family would like to thank AHN Healthcare (Hospice) and the Home Instead Caregivers for their continued care and support, during this time. In lieu of flowers, Memorial Donations, in Helen’s name, may be made to the Trinity Lutheran Church Memorial Fund or the Ellwood City Historical Society. You may read the obituary at www.turnerfh.com Please follow recommended guidelines by wearing masks and practice social distancing.

Helen M. Powell, 97, of Ellwood City, well known for her community spirit and accomplishments, passed away peacefully at her residence, on Thursday, June 18, 2020. She was born in Wurtemburg (Ellwood City), on October 26, 1922, the only child... View Obituary & Service Information

The family of Helen M. Powell created this Life Tributes page to make it easy to share your memories.

Send flowers to the Powell family.