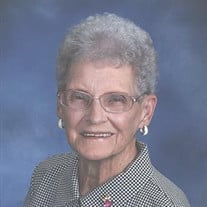 Evelyn M. Deemer, 89, of New Galilee (New Beaver Boro), passed away peacefully on Monday morning, July 9 2018 at Butler Memorial Hospital in Butler. She was born in Ellwood City on October 8 1928 to the late Nestor Peters, and the late Mary Tassin Peters. Evelyn attended Lincoln High School in Ellwood City, and was a longtime faithful member of First Christian Church in Ellwood City, where she belonged to Speeders. She was a member for many years of the North Sewickley Volunteer Fire Dept. Auxiliary. She worked until retiring at Riverside High School, in the cafeteria, and later at a school in Arizona . Evelyn enjoyed crocheting, playing cards, and baking, and was known for her homemade cookies. Most of all, she loved her family and her church. She was preceded in death by her husband of 69 years, Willard F. Deemer, whom she married June 21 1947. She is also survived by two daughters and one son: Linda (and John) Norge of New Galilee; Cynthia (and Charles) Boltinghouse of Florence AZ; and Willard Ralph (and Terrie) Deemer of Tempe AZ. Five grandchildren and nine great grandchildren also survive, as well as one sister, Mary Baker of Ellwood City. In addition to her parents, she was preceded in death by one sister, Amelia McCaslin, two brothers, William and Raymond Peters; and a half brother, Alvis Laurain, and two half sisters, Olga Uphoff and Celia Wilson. Friends will be received from 6:00- 8:00 P.M. on Thursday, July 12 in the TURNER FUNERAL HOME, 500 Sixth Street, Ellwood City. Services will be conducted at TURNERS on Friday, July 13 at 11:00 A.M. with Mr. Thomas A. O"Brien, minister of First Christian Church, officiating. Burial will be in the National Cemetery of the Alleghenies, Bridgeville PA. Memorial donations may be made to the First Christian Church, 110 Ada Drive, Ellwood City PA 16117. You may sign the guestbook, or send condolences at: www.turnerfh.com

Evelyn M. Deemer, 89, of New Galilee (New Beaver Boro), passed away peacefully on Monday morning, July 9 2018 at Butler Memorial Hospital in Butler. She was born in Ellwood City on October 8 1928 to the late Nestor Peters, and the late Mary... View Obituary & Service Information

The family of Evelyn M. Deemer created this Life Tributes page to make it easy to share your memories.

Send flowers to the Deemer family.