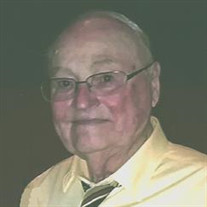 Ernest “Ernie” S. Demeter, 93, of Ellwood City passed away peacefully into eternal rest on February 2, 2020, at Heritage Valley Beaver Medical Center. He was the son of the late Stephen and Anna Marie (Chatlos) Demeter and was born February 5, 1926, in Ellwood City. He was a graduate of Lincoln High School, in 1944, and married the love of his life Norma on October 2, 1948. Ernie was a US Army Air Corps Veteran, serving in the Pacific Theater, during World War II. Ernie worked for Aetna Standard and retired after 38 years of service. He also drove a school bus and after dinner, he would go to Ryman Engineering and work until 9pm. Once retired, Ernie and Norma enjoyed making a home together, enjoying their backyard, camping and going on bus tours. He was a member of the Ellwood-Wampum Rod and Gun Club, where he competed on the men’s rifle team, and he was also a member of the NRA, The American Legion, and the VFW. He is survived by his wife, 71 years, Norma Jolley Demeter; one son; Dan Demeter and his wife Molly of Queensbury, NY, one daughter; Susan Picciotti and her husband Marty, of Wilmington, DE; grandchildren; Christopher Demeter of Queensbury, NY, Derek Demeter and his wife Micaela of Dover, NH, and two great-grandchildren; Harrison and Tessa Demeter. He is preceded in death by one child, in infancy, Gary Lee Demeter, two brothers; Stephen Demeter, John Demeter and one sister; Lillian Venezie The family will receive friends on Thursday, February 6, 2020 from 11:00am-1:00pm, with Funeral Services following at 1:00 p.m., with Pastor Nathan Loudon officiating at THE TURNER FUNERAL HOME-ELLWOOD CITY, PA. Interment will be in Locust Grove Cemetery.

Ernest &#8220;Ernie&#8221; S. Demeter, 93, of Ellwood City passed away peacefully into eternal rest on February 2, 2020, at Heritage Valley Beaver Medical Center. He was the son of the late Stephen and Anna Marie (Chatlos) Demeter and was born... View Obituary & Service Information

The family of Ernest "Ernie" Demeter created this Life Tributes page to make it easy to share your memories.

Send flowers to the Demeter family.