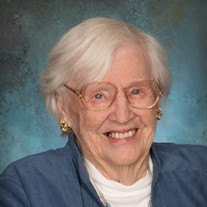 Emma Andrews, 105, of North Sewickley Twp. passed away at her home on Wednesday, April 13, 2022. She was the daughter of the late Albert and Sadie (Allen) Karch and was born January 30, 1917, in Carnegie, Allegheny PA. She is survived by her daughter; Leona Weaver and her husband Richard of North Sewickley, daughter-in-law; Gisele Bekemeyer of Spokane, Wa, her six grandchildren; Richard and Carrie Weaver of Venetia, PA, Mark and Melinda Weaver of Wayne Twp, Edward and Jill Weaver of Daugherty Twp, Kathy Walker of Spokane, Boyd and Debbie Bekemeyer of Deer Park, WA and Vivian Bekemeyer of Spokane, WA, She is also survived by six grandchildren, 12 great-grandchildren, and 8 great-great grandchildren. She and her family moved to Ellwood City and she and her siblings were raised there. Eventually Emma moved to Cusick, WA and lived there for many years, before returning to Ellwood City, in 2003. Emma worked at the Ellwood City Glass Plant, Franklin Twp, and was finally employed as a Service Personnel with the Ellwood City School District, from which she retired in 1979. Emma was an animal lover and enjoyed working outdoors as well as living by the Pend Peille River and most of all exploring the area as well as also traveling and exploring all of Washington State. She was preceded in death by her husband Donald Andrews, one son; Albert Bekemeyer, one granddaughter; Jessica Weaver and finally her eleven siblings; Albert, Boyd, John, Charles, Freeland, Sadie, Florence, Jeannette, Ella, Lucille and Roweine. Interment will be at the side of her late husband and son at Reardan Cemetery in Reardan, Wa. The family extends special thanks Gallagher Hospice, Andrea, Rosaland, Leah and Aleana for all their compassionate care of Emma. At the family's request her services will be private. Arrangements entrusted to the TURNER FUNERAL HOME located at 5th and Park in Ellwood City.

Emma Andrews, 105, of North Sewickley Twp. passed away at her home on Wednesday, April 13, 2022. She was the daughter of the late Albert and Sadie (Allen) Karch and was born January 30, 1917, in Carnegie, Allegheny PA. She is survived by... View Obituary & Service Information

The family of Emma Leona Andrews created this Life Tributes page to make it easy to share your memories.

Emma Andrews, 105, of North Sewickley Twp. passed away at her...

Send flowers to the Andrews family.