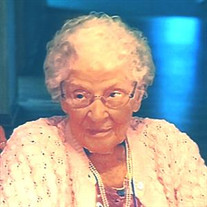 Ellen L. Rice Remler, 99, of Avalon Place, New Castle, formerly of Ellwood City (North Sewickley Twp.), passed away peacefully at Avalon Place on Monday morning, March 25 2019. She was born in Ellwood City on October 19 1919, to the late Oran V. Rice, and the late Ethel K. McKelvey Rice. Ellen graduated Lincoln High School in 1938, and lived in this area her entire lifetime. Ellen enjoyed reading, and playing bingo. She was preceded in death, in addition to her parents, by her husband, Charles W. Remler, who died January 27, 2002. She was also preceded by one son, Thomas C. Remler , who died April 12 2016, (and by her daughter-in-law Carole), and by one sister, Edna Baney; and one brother, Robert E. Rice. She is survived by one son, Richard L. (and Elizabeth) Remler of Ellwood City, and by one brother, Thomas O. Rice of Gibsonia PA. Also surviving are grandchildren: Christi (Robert) Isabella, Michelle L. Remler, and Jeffrey A. Remler, and several nieces and nephews. Nine great grandchildren also survive, as well as five great great grandchildren and four great great great grandchildren. Friends will be received from 4-6 P.M. on Wednesday, March 27, in the TURNER FUNERAL HOME, 500 Sixth Street, Ellwood City. Services will follow at TURNERS on Wednesday evening at 6:00 P.M. with the Rev. Elizabeth Wallace of the Wampum Presbyterian Church, officiating. Burial will be in Grandview Cemetery of Beaver Falls. Memorial donations may be made in her name to the Ellwood City Public Library, 415 Lawrence Avenue, Ellwood City PA 16117. You may sign her guestbook, or send condolences, at www.turnerfh.com

The family of Ellen L. Remler created this Life Tributes page to make it easy to share your memories.

Send flowers to the Remler family.