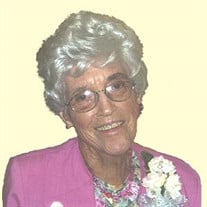 Elizabeth Householder Bodensky passed away on Friday, December 13 2018 at the age of 101, after living a long full life. She was living at the Passavant Retirement Home in Zelienople. Elizabeth was born on September 4 1917, to the late Ruth and Norman Kramer. After graduating from New Brighton High School, she married Elmer Hum, and moved to Virginia. After his unexpected death, she became an elementary school teacher on a "War Certificate" and taught in both Virginia, and later in a one-room schoolhouse near Ellwood City. She met Ralph Householder at Providence Baptist Church, and they were married in 1947. Ralph and his children to his first wife: Freda Nist, Anna Mae Drotleff, and Ralph, Jr., all preceded her in death. Ralph and Elizabeth had two children, Sharon and David Householder. Elizabeth resumed her teaching career as her children got older and taught first grade at Hillcrest Elementary School in North Sewickley for over 20 years, in addition to being very active at her church. A widow again, in 1982 she married Andrew Bodensky and moved to Vero Beach FL, where they led an active life together for 22 years. It was only after he passed away and her health deteriorated, that she moved back to Pennsylvania and Passavant to be closer to her family. Elizabeth is survived by her children, David, and his wife Andrea, Householder; Sharon Householder; 18 grandchildren; and numerous great and great great grandchildren. A Memorial service will be held in the Seaman Memorial Chapel at the Passavant Retirement Home, Zelienople on Wednesday, December 19, 2018 at 10:30 A.M. Memorial donations may be made to the Benevolent Fund at Passavant Retirement Home, 105 Burgess Drive, Zelienople, PA 16063. The TURNER FUNERAL HOME, 500 Sixth Street, Ellwood City is entrusted with arrangements. You may sign the guestbook, or send condolences at: www.turnerfh.com

Elizabeth Householder Bodensky passed away on Friday, December 13 2018 at the age of 101, after living a long full life. She was living at the Passavant Retirement Home in Zelienople. Elizabeth was born on September 4 1917, to the late Ruth... View Obituary & Service Information

The family of Elizabeth Householder Bodensky created this Life Tributes page to make it easy to share your memories.

Send flowers to the Bodensky family.