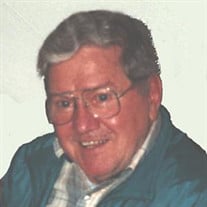 Earl W. Tyler, 95, of Ellwood City, passed away peacefully surrounded by his family and friends on Tuesday afternoon, December 18 2018 at The Grove at Harmony. He was born in Beaver Falls on March 9 1923, to the late Joseph and Stella DeVinney Tyler.. Earl graduated from Lincoln (Ellwood City) High School, and later worked in a CCC camp, sending funds home for his family. He then worked at National Tube and later Carmac Chemical. At one point Earl was working at 5 jobs to support his family. He served in the US Army in the 1991st Engineering & Firefighting platoon, 874th Airborne, Army Air Force, in World War II. He fought at D-Day Normandy; Rhineland, Italy (Arno Rome, Naples Foggia) and Appenines, and was awarded the Silver Star, as well as EAME, Occupation, Bronze Arrowhead and Victory medals. In 1945, he was granted an audience with Pope Pius for liberating Rome. Later, his son Todd would also serve, and follow his father"s service to our country. Earl had been an usher and member of Calvin Presbyterian Church in Ellwood City. Earl was quick with a wisecrack, and everyone around him at ease. He loved people, and they loved him. He was brave, stoic, loyal, calm and a comfort to all. He was well read, and won trivia contests to the end. He never lost his intellect. All that knew him will miss him. Earl was preceded in death by his wife, Dorothea "Dot" Mae Passante Tyler, who died January 16 2008; and a sister and two brothers: Ralphetta Majors; Ralph Volpe, and Lawrence Tyler. He is survived by three sons and one daughter and their spouses: Dennis Tyler of Ellwood City; Todd (and Jodi) Tyler of New Castle; Robert (and Patty) Tyler of Ellwood City; and Deborah (and Louis) Lordi of Beaufort SC. Seven grandchildren survive, and nine great grandchildren. He is also survived by four sisters: Clara Turco of New Castle; Marlene LaCava, Louise Vitullo and Carol Colaberadino, all of Ellwood City; and several nieces, nephews and their children. Friends will be received from 5- 8 P.M. on Thursday, Dec. 20 at the TURNER FUNERAL HOME, 500 Sixth Street, Ellwood City. Funeral services will be conducted at TURNERS on Friday, Dec. 21, at 11:00 A.M. with the Rev. R. Tod Custer, pastor of Christ Presbyterian Church, officiating. Members of the Veterans Honor Guard will conduct full military honors at TURNERS. Burial will follow in Locust Grove Cemetery, North Sewickley, where he will join his beloved wife, Dorothea. The family wishes to thank The Grove at Harmony for their compassionate care. Memorial donations may be made to the Ellwood City Area Public Library, 415 Lawrence Avenue, Ellwood City PA 16117. You may sign the guestbook, or send condolences at: www.turnerfh.com

Earl W. Tyler, 95, of Ellwood City, passed away peacefully surrounded by his family and friends on Tuesday afternoon, December 18 2018 at The Grove at Harmony. He was born in Beaver Falls on March 9 1923, to the late Joseph and Stella DeVinney... View Obituary & Service Information

The family of Earl W. Tyler created this Life Tributes page to make it easy to share your memories.

Send flowers to the Tyler family.