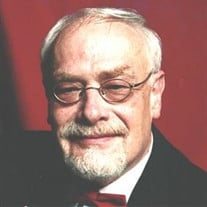 Dennis L. Wallace, 71, of Ellwood City (Wayne Township), passed away unexpectedly on Wednesday, October 25, 2017 at his residence. He was born in Ellwood City on December 14, 1945 to the late Clarence Edward Wallace and the late Mildred McQuiston Wallace. Dennie was a graduate of Lincoln High School in Ellwood City, class of 1963. He worked at the former G.K. Garrett Co., and later Laszlo Plumbing, and C & C Equipment Co. He also was a union carpenter. He was a longtime member of Christ Presbyterian Church, where he had been an elder and deacon, a member of the Pairs and Spares Sunday School class, and helped with the yearly Boars Head Festival. Dennis was very active in area Masonic affairs. He belonged to the Ellwood-Parian Lodge # 599 F. & A.M., and the Wilmington Lodge, F. & A.M. #804. He was a past master at both lodges. He also was a member of the New Castle Consistory and Eastern Star in Ellwood City. Dennie also worked and acted at the New Castle Playhouse, and the Red Barn Theatre. He also loved reading and was an amateur magician. He loved flying, and had his own ultralight and motorcycle. Most of all, Dennie loved people. He was everyone"s "go-to" person, and loved helping people and fixing things. He is survived by his wife of almost 45 years, Nancy Kennedy Wallace. He loved helping Nancy with her book sales, and was her biggest fan. Also surviving are two daughters: Mollie L. Wallace and her friend Christi Ptacek, whom Dennie referred to as his adopted daughter, of Zelienople, and Rev. Elizabeth A. Wallace, of Ellwood City. He is also survived by three brothers and three sisters: Lana (Harvey) Jewett of San Marcos, CA; Ronald Wallace of Wampum; David Wallace of Fayetteville TN; Deborah (Paul) Porrazzo and Martha Gavroy of Mesa AZ; and Thomas (Cathy) Wallace of Ellwood City. Friends will be received from 6:00- 8:00 P.M. on Friday, October 27 and from 10:00 A.M. until 12:00 P.M. (Noon) on Saturday, October 28 at Christ Presbyterian Church- 325 Spring Avenue, Ellwood City. A service of witness to the resurrection will be held on Saturday, October 28 at 12:00 P.M. (Noon) at Christ Presbyterian Church, Ellwood City, with the Rev. Ralph Hawkins, Rev. Ronee Christy, Rev. R. Tod Custer, his pastor, and his daughter Rev. Elizabeth Wallace officiating. Burial will be in St. John"s (Burry"s) Church Cemetery, New Sewickley Twp. The TURNER FUNERAL HOME, 500 Sixth Street, Ellwood City is entrusted with arrangements. Members of Ellwood Pythian Lodge #599, F. & A.M. and Wilmington Lodge, #804, will conduct a Masonic service on Friday, Oct. 27 at 5:45 P.M at the church. Memorial donations may be made in Dennie"s name to the Ellwood City Area Library, 415 Lawrence Avenue, Ellwood City PA 16117. You may read the obituary, sign his guestbook, or send condolences at: www.turnerfh.com

Dennis L. Wallace, 71, of Ellwood City (Wayne Township), passed away unexpectedly on Wednesday, October 25, 2017 at his residence. He was born in Ellwood City on December 14, 1945 to the late Clarence Edward Wallace and the late Mildred McQuiston... View Obituary & Service Information

The family of Dennis L. Wallace created this Life Tributes page to make it easy to share your memories.

Send flowers to the Wallace family.