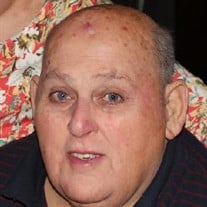 David A. Braymer, 78, of Franklin Twp, Ellwood City, passed away on Friday, March 26, 2021. Born August 2, 1942 in Meadville, PA to the late Theodore and Irene (Battin) Braymer, he was raised in the Castle Shannon neighborhood of Pittsburgh and graduated from Dormont High School and The College of Emporia (Emporia, KS). On December 19, 2020, David celebrated his 50th wedding anniversary with his wife, Mary Jane (Houk). A man of Christian devotion, he was a loving husband, father, grandfather, son, brother, uncle, and friend. Among the highlights of his life was hunting and spending time with his family at the family camp, The Black Jack Inn, in Forest County. He was never happier than spending a day in his homemade treestand with his sons and grandchildren. David was a teacher for 36 years, educating and championing the cause of students with disabilities. His career began in the Avella School District, where he cherished his days as a teacher and a coach. As a teacher with the Beaver Valley Intermediate Unit, he taught in Midland, New Brighton, Rochester, and Beaver Falls; he made many friends and enjoyed his time in each district. As a father, David was very involved in the activities of his children, devoting many years to the Franklin Twp Baseball Association, Riverside Girls’ Athletic Association, and the Riverside Band Boosters. He loved chaperoning band trips and dancing at the band banquets. David was an active member of Slippery Rock Presbyterian Church, serving as a Trustee and Elder. David is survived by his wife, Mary Jane, his children Robin (Bobby) Rogers, David (Krista) Braymer II, and John (Lorena) Braymer, grandchildren, Amber (Bob) Krueger, Robby (Kayla) Rogers, Kyle (Kendra Beltran) Braymer, Mackenzie Rogers, Daniel Rogers, David Braymer III, and Michael Braymer, and great-grandchildren Jaiden, Adrian, and Silas Krueger, and Elizabeth, Parker, and Alec Rogers. He is also survived by his brother John (Meta) Braymer, brother-in-law Conrad (Sandra) Houk, and many special nieces and nephews, Linnea Borter, Heidi Borter, Ted (Lisa) Borter, Meredith (Dan) Hurt, Steve Houk, Brian (Kim) Houk, Justin (Melissa) Houk, and Joseph Houk. In addition to his parents, David was preceded in death by his parents-in-law John and Wilberta Houk, step-father A. James Coulter, sister and brother-in-law Carol and Rev. John P. Borter, and brother-in-law Thomas Houk. A Celebration of Life will be held on March 29 at 11:00 am at the Slippery Rock Presbyterian Church, with Pastor Carolyn Moss officiating. The family will receive visitors from 10:00 am until the time of service in the church parlor. Interment will take place at Blooming Valley Cemetery in Crawford County, PA. In lieu of flowers, the family is requesting that any memorial contributions be made to the Rotary Club of Ellwood City or the Franklin Twp Volunteer Fire Department. Arrangements are entrusted to TURNER FUNERAL HOME.

David A. Braymer, 78, of Franklin Twp, Ellwood City, passed away on Friday, March 26, 2021. Born August 2, 1942 in Meadville, PA to the late Theodore and Irene (Battin) Braymer, he was raised in the Castle Shannon neighborhood of Pittsburgh... View Obituary & Service Information

The family of David A. Braymer created this Life Tributes page to make it easy to share your memories.

David A. Braymer, 78, of Franklin Twp, Ellwood City, passed away...

Send flowers to the Braymer family.