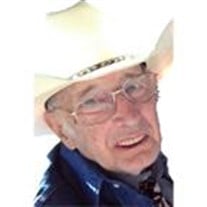 Colonel E. Dale Cunningham, 90, accepted an auction bid from the One who owns the cattle upon a thousand hills, on March 20 2019. Our deep loss is his elated reunion with his sweetheart wife, Helen. He shared that deep loss of his father and mother, Charles and Elizabeth Kiesling Cunningham, and many dear friends and relatives he missed daily. He was born May 23 1928 and raised on the family turkey farm, and rode his pony to school. He graduated Princeton HS in 1946, and was FFA President. He graduated auction school earning his Colonel degree, and worked auctions since the age of seven. He also held jobs at American Cyanamid, Dickenson Construction, Mesta Machine, and as a meat cutter. He was a US Army veteran of the Korean War. He was a proud member of OH and PA Natl. Auctioneers Assn., PA Trappers, PA Deer Assn., Lawrence Co. and PA Federation of Sportsmen, PA Game Commission Hunter Safety Instructor, Mahoning Co. Coon Hunters, East New Castle Grange, 4-H Leader and Advocate, gave pony rides at the Lawrence County Fair and was a founding member of Castlewood Rod & Gun Club. He attended many churches: Bell Memorial, Harmony Baptist, Center, and Keys to the Kingdom. His joys included auctions, hunting, farming, lotto tickets, livestock, mountain curr dogs, telling jokes, and dancing on tables. He is survived by children: Linda (Anthony) Barletto, Debra (Lewis) Valvano, Mark Cunningham, Amy (Bobby Jr.) Dicks, and Connie (Scott) Moorhouse. Nine grandchildren survive: Martin Barletto, Morgan and Nicholas Valvano; Brooke, Kristin, and Bobby Dicks III; Chandler, Regan, and Brady Moorhouse. Friends will be received from 2-4 and 6-8 P.M. on Friday, March 22, 2019 in the TURNER FUNERAL HOME, 500 Sixth Street, Ellwood City. Services will be conducted at TURNERS on Saturday, March 23, at 10:30 A.M. with Pastor Joe Lahr and Rev. Matthew Bupp, officiating. Burial will be in Mount Hope Cemetery. Full military rites will be observed at TURNERS by the Veterans Honor Guard. Memorial donations may be made to the American Diabetes Assn., in care of the family. You may sign his guestbook, or send condolences at: www.turnerfh.com

Colonel E. Dale Cunningham, 90, accepted an auction bid from the One who owns the cattle upon a thousand hills, on March 20 2019. Our deep loss is his elated reunion with his sweetheart wife, Helen. He shared that deep loss of his father and... View Obituary & Service Information

The family of Col. E. Dale Cunningham created this Life Tributes page to make it easy to share your memories.

Send flowers to the Cunningham family.