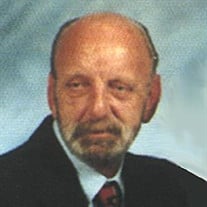 Charles L. "Chuck" Timblin, 74 , of New Castle, passed away peacefully after a lengthy illness on Saturday, July 22 2017 at Butler Memorial Hospital in Butler PA. He was born in Ellwood City on March 27, 1943, to the late Charles W. and Alma Hazen Timblin. Chuck graduated from Lincoln High School in Ellwood City, class of 1961 and served in the US Army during the Vietnam War, including one year in Vietnam. He worked at the former Mathews Conveyor, then was a cold draw foreman at B & W Tubular Products in Beaver Falls, and lastly Shook Welding, where he retired. He was a longtime member of Calvin Presbyterian Church in Ellwood City, where he had served as a deacon and an elder. With his wife Marsha, he was among the founding members of the local Carpenter"s Project, that improves local homes. Chuck enjoyed fishing, hunting, Pittsburgh sports teams including the Penguins and Steelers, and his time in Florida. He was also a member of the VFW, American Legion, and DAV. He is survived by his wife of 37 years, Marsha Thornhill Timblin. Also surviving are two sisters: Joyce Timblin West Lawson of Wheeling WV; and Sally Timblin Iseman of Laurel MD. Numerous cousins, nieces and nephews also survive. Visitation will be from 10:00 A.M. until servicetime at 12:00 Noon on Saturday July 29 at Calvin Presbyterian Church. A Celebration of Life Service of Witness to the Resurrection service will be conducted on Saturday, July 29 2017 at 12:00 Noon at Calvin Presbyterian Church, 615 Crescent Avenue, Ellwood City, with his pastor, Rev. Sean Brubaker, officiating. Full military rites will be observed at Calvin Presbyterian Church by the Veterans Honor Guard. Members should be at the church by 11:30 A.M. Saturday, July 29 prior to conducting their service at Noon. The Turner Funeral Home, 500 Sixth Street, Ellwood City, is entrusted with arrangements. Memorial donations may be made to the Carpenter"s Project, Box 463, Ellwood City PA 16117. You may read the obituary, sign his guestbook, or send condolences at: www.turnerfh.com

Charles L. "Chuck" Timblin, 74 , of New Castle, passed away peacefully after a lengthy illness on Saturday, July 22 2017 at Butler Memorial Hospital in Butler PA. He was born in Ellwood City on March 27, 1943, to the late Charles W. and Alma... View Obituary & Service Information

The family of Charles L. "Chuck" Timblin created this Life Tributes page to make it easy to share your memories.

Send flowers to the Timblin family.