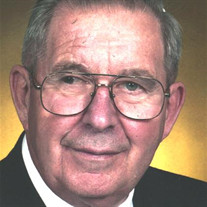 M. Charles Nye, 88, of Portersville PA, passed away peacefully, on Wednesday afternoon, August 2 2017 at Sunnyview Nursing and Rehabilitation Center in Butler PA. He was born in Fombell, Beaver County, on April 6 1929 to the late Joseph Bert Nye and Florence Lena Weil Nye. Charles graduated from Muddy Creek High School in Portersville. He was a veteran of the US Army, serving as a corporal in the 47th Infantry Division, in Germany with the 28th Anti-Aircraft Battalion. He worked at Mooney Bros. Cement Block plant in New Castle; Mathews Conveyor in Ellwood City, and then was manager of the Agway store in Portersville. After retiring, he worked part time at Agway and Moore and Moore Hardware in Portersville. He enjoyed the outdoors and gardening. He was a longtime active member of the Ellwood City Free Methodist Church, where he had served as Sunday School superintendent and usher. Chuck"s family and his church were the most important things in his life. He is survived by his wife of 64 years, Ellen McEwen Nye. He is also survived by two brothers, and their wives: Calvin W. Nye of Portersville, and Joseph B. (and Dawn) Nye of New Matamoras OH. Several nieces and nephews and great neices and nephew also survive. He was preceded in death by his parents, and by three sisters, Margaret J. Lawther, Betty J. Rinker, and Nellie V. Brown, and a brother in infancy. Friends will be received from 6-8 P.M. on Friday, August 4 , in the TURNER FUNERAL HOME, 500 Sixth Street, Ellwood City. Friends also may call from 1-2 P.M. on Saturday. Services will be on Saturday, August 5, at 2:00 P. M. at TURNERS, conducted by Pastor Raymond Start of the Ellwood City Free Methodist Church, and Rev. Forrest States. Burial will be in St. Marks Lutheran Cemetery, Franklin Twp. Beaver County. Memorial donations may be made to the Ellwood City Free Methodist Church, 412 Glen Avenue, Ellwood City PA 16117. You may read the obituary, sign the guestbook, or send condolences at: www.turnerfh.com

M. Charles Nye, 88, of Portersville PA, passed away peacefully, on Wednesday afternoon, August 2 2017 at Sunnyview Nursing and Rehabilitation Center in Butler PA. He was born in Fombell, Beaver County, on April 6 1929 to the late Joseph Bert... View Obituary & Service Information

The family of M. Charles Nye created this Life Tributes page to make it easy to share your memories.