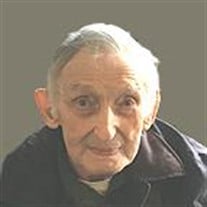 Charles L. Greenwood, 98, of Ellwood City, passed away peacefully on Saturday afternoon, June 15 2019 at his daughter"s residence in Wayne Township. He was born in Ellwood City on January 17 1921, to the late Harris and Blanche Barnhart Greenwood. He graduated from Lincoln High School in 1941, and then served in the US Army during World War II, as a military policeman with the 719/749th Battalion stationed on the West Coast.At the end of the war, he guarded ships for the new United Nations Conference. Charlie worked at the Ellwood Works of US Steel, then Crucible Steel , and later J. & L. Steel . He also was a well -known plumber in Ellwood City for over 60 years. He had donated more than 48 pints of blood to the local Blood Bank. Charlie was well-liked by everyone, and was known for his ability to "wiggle his ears". He was a member of First United Methodist Church, and also F.& A.M. #599, Ellwood-Parian Masonic Lodge, as well as New Castle Consistory with Legion of Honor, and Syria Shrine in Pittsburgh. He was an avid hunter, belonged to the Ellwood-Wampum Rod & Gun Club, and American Legion Post #157. He was preceded in death, in addition to his parents, by his wife of 67 years, Eleanor "Chick" Zombeck Greenwood, who died December 29 2012. They were married in 1945. He is survived by one daughter, Barbara Bubb of (Wayne Twp.) Ellwood City; and two sons: Dr. Charles R. Greenwood of Morongo Valley CA; and H.J. (and Patricia) Greenwood of Ft. Morgan CO. Five grandchildren and five greatgrandchildren also survive. The last of his family, he was preceded in death by two brothers and one sister: Clyde Greenwood, Raymond H. Greenwood, and Esther Cragle, as well as a son-in-law, John W. Bubb. Friends will be received from 6:00 "“ 8:00 P.M. on Thursday, June 20, 2019 in the TURNER FUNERAL HOME, 500 Sixth Street, Ellwood City. Services will be conducted at 8:00 P. M. on Thursday, June 20 , at TURNERS, with the Rev. Dr. Keith R. Black, officiating. Burial will be in Pleasant Hill Cemetery, Perry Twp. Memorial donations may be made to the donors" favorite charity. You may sign his guestbook, or send your online condolence at: www.turnerfh.com

Charles L. Greenwood, 98, of Ellwood City, passed away peacefully on Saturday afternoon, June 15 2019 at his daughter"s residence in Wayne Township. He was born in Ellwood City on January 17 1921, to the late Harris and Blanche Barnhart Greenwood.... View Obituary & Service Information

The family of Charles L. Greenwood created this Life Tributes page to make it easy to share your memories.

Send flowers to the Greenwood family.